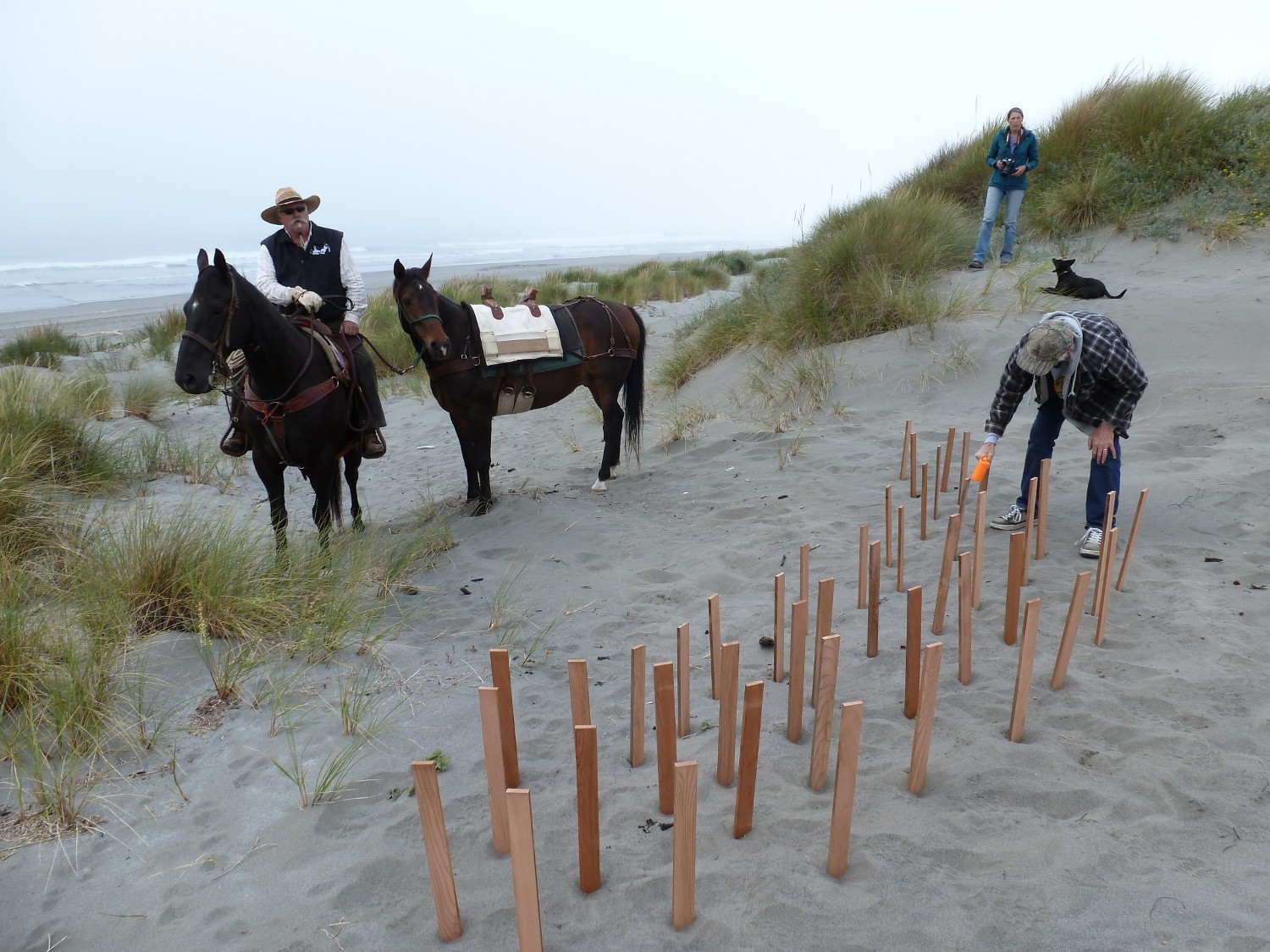 Yesterday afternoon, a small group of people, two horses and a dog hiked along the sandy path from the Manila Community Center across the rolling dunes to the ocean. When they reached the front line of dunes, where vegetation peters out and the beach slopes down to the coastline, two men began shoving and hammering wooden slats into the sand. Before long they had several dozen of the shims standing upright in the valley between two dunes. The planks looked like tiny frontier grave crucifixes waiting for their crossbeams. Before they left, they shoved more planks into the sand of an adjacent valley.

The group was attempting a bit of guerrilla dune restoration, using an unauthorized “bio-mimicry” technique they’d learned about online. The slats, the men explained, are supposed to mimic dune vegetation by catching wind-blown sand and allowing it to accumulate at their bases. Periodically, as the sand level rises, the slats must be lifted up a few inches. Before too long (a year or two, maybe) you’ve got a rebuilt dune. That’s the plan, anyway. But it’s not the official plan. 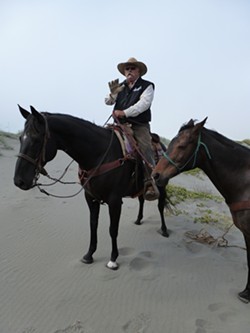 The management and restoration plan for these particular dunes belongs to the Manila Community Services District. Yesterday’s renegade beach engineers think the district has been doing it all wrong, and so they set out — without a coastal development permit — to try a new approach.

Here’s the briefest of backgrounds: The men, including Uri Driscoll, Bill Weigle, Dennis Mayo and Ray Reel, are avid horsemen and trail-access advocates who for years now have been at odds with various dune management/restoration agencies. (For more detail see Heidi Walters’ cover story from April 2011.) They argue that the 30-year, multi-agency campaign to remove European beach grass (Ammophila arenaria) is a fool’s errand that’s only serving to destabilize the dunes — wiping out their favorite horse trails in the process. They hope that their experiment, which they planned to announce today before the Humboldt County Board of Supervisors, will reopen a debate on best practices — a debate, in their opinion, that they and their ilk have been systematically left out of.

Reached earlier today for comment on these unsanctioned activities, Friends of the Dunes Executive Director Carol Vander Meer said that the biology and ecology of our local dune ecosystem is unique — different than the Oregon coast and very different than Cape Cod, where the wood-slat approach is currently being used. “I would use extreme caution thinking we can apply techniques from other areas,” Vander Meer said.

As she stated in her May 21 “My Word” piece for the Times-Standard, Vander Meer said that dunes are naturally mobile and dynamic, so she’d be curious to see the experiment sites, which the experimenters described as “blow-outs.” She added that her organization and others in the Humboldt Dunes Cooperative work with scientists and other experts, and while she’s skeptical about the wood-slat technique, she won’t rule it out. ”I think we’re always open to new knowledge, facts and information.”

The manager of the Manila Community Services District was not available for comment.