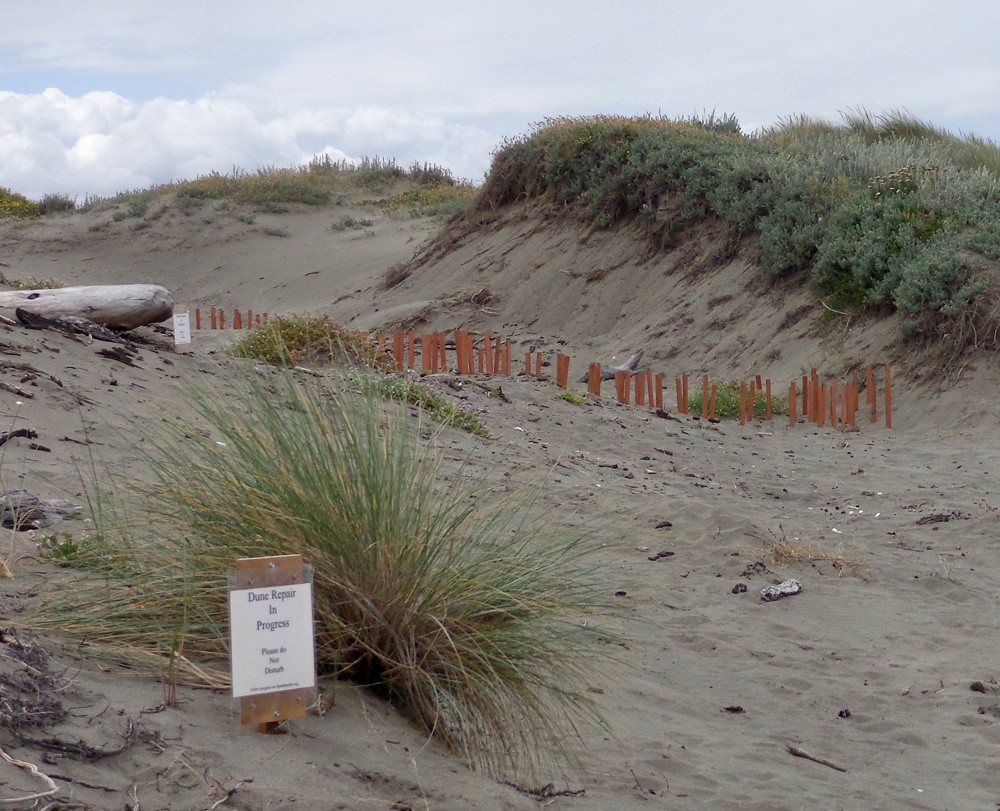 The wooden stakes planted in the Manila dunes are gone again, spurned as an un-sanctioned environmental experiment. The Manila Community Services District removed them today, and is storing the slats at its office if someone wants to pick them up.

According to Steve Werner, a Humboldt County building and planning supervisor, the district had to either amend its existing permit to include the stakes or else remove them from the beach. Werner said the installation of the stakes was "surprising to see without district authorization." The Manila Community Services District owns the land and already has a permit for dune restoration, but that permit doesn't include the rogue stake experiment, which went in without any official approval.

"I didn't see a need for a permit. We're just repairing," said Uri Driscoll, who compared his group's stake installation to children building in the sand. Now that he has learned the county sees it differently, he plans to investigate a little more.

On June 17, Driscoll and his ad hoc team, Bill Weigle, Dannis Mayo and Ray Reel, pounded in the sticks to try to rebuild what they consider a "blowout," an unstable depression in the dunes ("Rogue Dune Experiment," June 20). They were hoping to repeat the success of similar actions on the East Coast and in Oregon. It's their contention that the removal of European beach grass by the Friends of the Dunes, under the auspices of the county and the Manila district, has damaged the dunes.

Friends of the Dunes Executive Director Carol Vander Meer conceded that stakes might be something to try in the future, but she stressed the need for careful consideration and input from the scientific community first. She pointed out, "What some people might call a blowout might be a natural area of movement that might allow new plants to come in," adding, "From an ecologist's point of view, we need some areas like that."

Someone first removed the stakes over the weekend, but no one claimed responsibility. Driscoll and Reel wasted no time re-planting them, adding a sign that read, "Dune repair in progress. Please do not disturb."

John Woolley, a Manila Community Services District board member, said that any plan for the dunes "should be first examined as a proposal, which we've never received." Even if the district wanted to add the stakes to its permit, the slats could not go in until the permit was amended and approved.

Driscoll was surprised to learn the stakes had been removed again. He said that the Manila Community Services District needs "to address the fact that they created a topographical change in the dune," and that, "We're hoping to have a collaboration ... and bring the dune back to its original height and shape."