With chants and kazoos, cheers and party horns, more than 100 people sent up a joyful noise in front of the Humboldt County Courthouse this evening, celebrating a pair of Supreme Court rulings on gay marriage.

Drivers honked in shared jubilation as they passed, and Susan McGee marveled that the support had begun sounding the minute she arrived around 5 p.m. So much had changed in her lifetime, McGee said. Twenty years ago, in a time when gay marriage seemed to be “the idea of science fiction and fantasy … I would never have believed it.” Not just the support from the nation’s highest court, but the acceptance from so many who would once have been hostile or indifferent.

McGee, of the Humboldt Equality Coalition, helped organize the rally along with Linda Shapeero of the Eureka-Arcata PFLAG (Parents, Families and Friends of Lesbians and Gays). They figured that well over 200 people had stopped by the Eureka event sometime during the evening, because they had handed out 125 chant sheets and plenty of people didn’t take one.

When people weren’t chanting (“two, four, six, eight, give us equality in every state,”) they were waving rainbow flags, hoisting signs that read “love unites” and “love wins again,” and hugging. And smiling.

But many also remembered that one day earlier, the U.S. Supreme Court had struck down part of the federal Voting Rights Act, in a decision they feared could make it easier for states to shut people out of the voting booth.

Again and again on Wednesday, in tweets and Facebook posts that sounded twin notes of celebration and sorrow, Jan Ostrom saw the same theme: “Don’t forget what happened the day before.”

Ostrom, carrying a sign that proclaimed “our love is here to stay,” was at the courthouse with her wife, Alexandra Wineland. They were the second couple married in Humboldt back in 2008, during the last brief window when gay marriage was legal here. Now, just a week past their fifth anniversary, they were reveling in the sunshine and taking a moment to reflect on all that the court has done in the past few days. 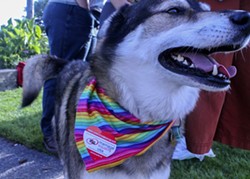 ‘It’s on our minds because oppressed people are oppressed,” Ostrom said. “It’s very depressing that my country would want to do this.”

Still, said Amy Granfield, who had driven down from Kneeland with her partner to join the rally, other times have looked bleak too, and people have muddled through, claiming what victories they can. Wednesday evening, outside the courthouse in Eureka and at the Arcata Plaza, was for the victories. 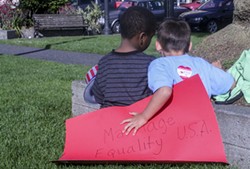 At the celebration at the Arcata Plaza, Cheryl Rau said she was not sure that the Supreme Court would rule in their favor. “It was hard to read, especially after the way the Voting Rights Act went.” Either way, though, the rally would’ve been held on the Arcata Plaza. “We were going to come whether it was good news or bad news,” she said.

Rau has been with her partner, Patricia McCutcheon, for 28 years. At one point, McCutcheon got on the rudimentary sound system that was set up at the north end of the plaza and recited a poem, “Unsanctioned Epithalamium.” She added the caveat that it was now out of date. An epithalamium is a poem about marriage. 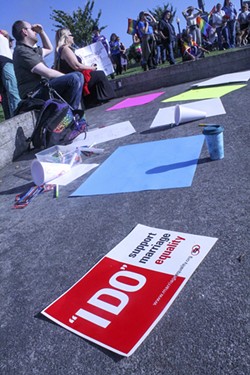 There were around 70 people on gathered on the plaza. Some had rainbow flags. Some had signs. When there wasn’t a speaker on the mike, there were chants (“straight, gay, black, white, marriage is a civil right”) and songs (“For What’s It’s Worth,” by Buffalo Springfield).

Ten-year-old Abby Hastings-Tharp came down from Salem, Ore. with her two brothers and mother to celebrate the victory. She’s been a gay-rights activist since she was 4 years old, when she led a march across the Golden Gate Bridge. “I think it’s wrong that my moms aren’t allowed to get married,” she said.

“The clean, pure law of the land says you’re equal,” she said. “Law comes first, and then prejudice gets erased.”

Soon marriages between gay couples will become normalized, she said. “There are people who are not going to remember before this day.”