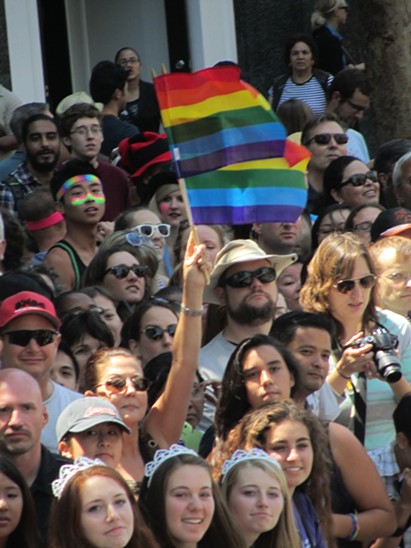 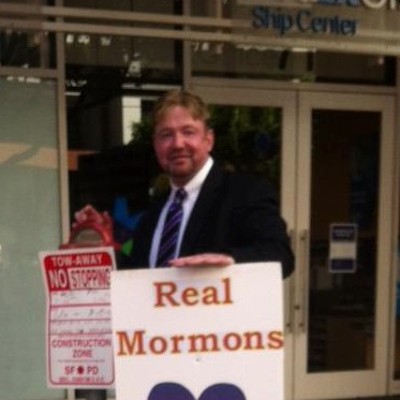 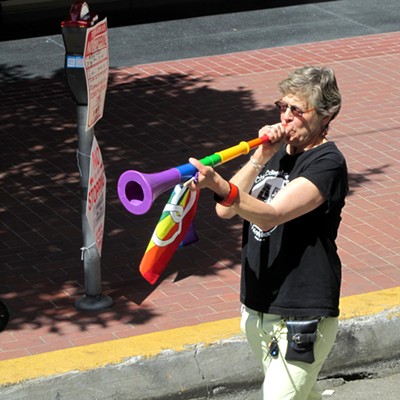 This year’s gay pride parade in San Francisco was a historic celebration, coming just days after the Supreme Court struck down the Defense of Marriage Act and in effect nullified Proposition 8.

Because the Journal and the San Francisco LGBT newspaper The Bay Times share the same printing company, the Journal was offered two seats on the Bay Times float, a bright blue open-top bus with balloons tied to the railings. Bay Times editor Betty Sullivan was chosen as one of the grand marshals of the parade.

In the morning at around 9:30, the contingents lined the side streets of Market Street, the parade’s route. The San Francisco Lesbian/Gay Freedom Band played a warm up song: “Chapel of Love.”

While there was no wedding pavilion, like at the 2008 parade when gay marriage was legal for a brief time, the theme of marriage was everywhere, from a man in a wedding dress on a parade float to a car with tin cans tied to the bumper and a sign in the back that read “Just married with liberty and justice for all.”

It was Marvin Munoz’s first time at the pride parade. “It was really nice,” he said. “I saw a lot of things I wasn’t expecting to see.” Things like the sheer volume of people who walked in support of whistleblower Bradley Manning, the San Francisco Leather Alliance bondage float and “public nudity — which, OK.”

Then there was the PETA float, with women running alongside in cabbage bikinis, the Safeway float, the Bank of America float and the Kaiser Permanente float, followed by a crowd of people with giant blue balloons.

As the last group, the Bay Area Humanists, turned down Eighth Street, the parade was over. But at the civic center, the events were just heating up. There were the same booths there are at every festival (fried food on a stick, tie dyed souvenir T-shirts, “stylish hats!”) interspersed with more Pride-specific attractions (“meet nude men,” and the leather tent).

The main stage was directly in front of city hall, but booming music poured from at least four other directions. The noise, the crowds, the smells were very distracting.

The PFLAG booth is a good place to get some perspective. The tent houses the organization Parents and Friends of Lesbians and Gays, and is mostly full of parents. Kelly Acton is one of them. “People are really celebrating,” she said. “Anything that celebrates marriage is a positive thing.”

Her son, Skylar, came out when he was 16. When Acton heard the Supreme Court ruling, the first thing she did was text him. “You can get married now,” she said. Although she adds that he’s still a couple years off from that. He’s only 21 after all.

“When my son first came out, I was afraid for him,” she said, with tears in her eyes. But coming to the pride parade makes her feel better. She likes seeing all these people celebrating and supporting people like him, she said. “I feel like the world is a safer place for my son.”