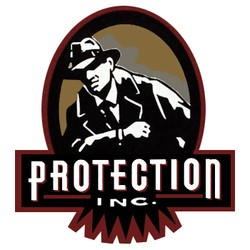 Timothy O'Neal, owner and president of Sacramento-based Protection Loss Prevention, says his officer used textbook police technique when he apprehended an alleged shoplifter Saturday afternoon across the street from the Arcata Co-op. O'Neal's company has been contracted by the Co-op since 2011.

As we reported yesterday, bead store owner Michael King witnessed the tail end of the incident and later accused the unidentified loss prevention officer of using excessive force. King also said that the officer tried to confiscate his camera. O'Neal, who called the Journal from his company's Sacramento headquarters this morning, offered a different take. 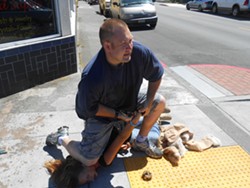 "That is a protocol armband hold," O'Neal said of the pictures snapped by King. He said you can tell by the angle of the officer's legs that he was keeping most of his weight on the front foot, not the knee kneeling on the woman's neck. This technique, he said, is taught at police academies all over the world.

"It’s for his safety and her safety, having the knee toward the back of her neck," O'Neal said. "It looks painful. It does. But we’re not dealing with somebody who’s just a victim."

The Journal asked Arcata Police Detective Sgt. Todd Dokweiler to look at the photos and try to analyze the technique. "That doesn’t look to be drastically different than certain law enforcement handcuffing techniques," Dokweiler said, though he added that it's impossible to tell from photographs what level of force was used.

After speaking with his employee, whose name he would not reveal, O'Neal claimed that the loss prevention officer identified himself and tried to apprehend the woman after she left the store with stolen merchandise, but the woman resisted violently -- running across the parking lot, hitting the officer, scratching his arms and finally throwing a cup of scalding-hot coffee on him.

And O'Neal vehemently denied that his employee tried to take King's camera. "At no point did he ever say, 'Give me your camera.' He said, 'Please do not take pictures of me.'"

King claims that the man repeatedly demanded his camera, even asking a Co-op employee to take it from him and then trying to enter the locked bead shop.

Melanie Bettenhausen, the North Coast Co-op's outreach director, said that she couldn't talk about the case due to privacy concerns and an ongoing investigation into the specifics. But she did say that the Co-op chose to contract with Protection Loss Prevention after verbal and physical threats against store employees got out of hand.

"We know we made the right choice, as the number and nature of thieves in our area has increased and gotten more violent over the years," Bettenhausen said in an email. "We want to have a safe environment for our employees to work and our customers to shop."

Asked whether there's a policy about the loss prevention officers pursuing people off the property, Bettenhausen said management prefers them to remain on the premises and contact the police. "However, in order for the loss prevention company to do its job, we have to allow them to use their discretion when safety is an issue."