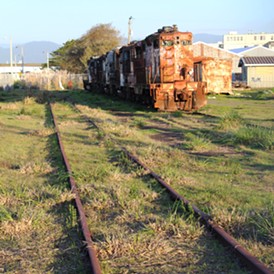 A whole lot of money and a whole lot of cargo. That’s what a draft report says is necessary to build and pay for a “high risk” east-west railroad between the Samoa Peninsula and the national rail system in the Central Valley. The cargo necessary for a viable railroad would make Humboldt Bay one of the largest shipping ports on the West Coast — provided the necessary infrastructure could be built, the market holds, and the existing, mostly superior competition doesn’t spike the imagined endeavor.

The report, commissioned by the Humboldt Bay Harbor, Recreation and Conservation District, is still in draft stage. In it, BST Associates and Burgel Rail Group, of Washington and Oregon respectively, say high construction costs — $1.07 billion to $1.24 billion, depending on the route — come largely from the “extreme ruggedness” of the six prominent ridges and valleys between the Central Valley and coast. And steep, twisty terrain doesn’t just make planning a route and construction different — it increases operating and maintenance costs. The report estimates upkeep would cost $90,000 per mile for an east-west railroad — $18 million to $20 million a year, depending on the route.

The report identifies three possible routes beginning in Samoa that could end in either Redding, Red Bluff or Gerber.

One arcs north of Blue Lake then down toward State Route 36:

The second snakes through Eureka, Loleta and Fortuna down to Alton, where it turns east:

The third points south down 67 miles of existing rail lines before punching east through the mountains near Fort Seward:

Making the rail’s success even more challenging are the limitations of Humboldt Bay’s port — a necessary hub for the railroad’s viability. Says the report:

In order for this investment to be financially feasible, the rail line will need to generate large volumes of cargo. A rail line to Humboldt County would face strong competition from existing ports, primarily those on the U.S. West Coast. Humboldt County would face several competitive disadvantages relative to these other ports, including the need to cover the cost of constructing the new line, and the lack of a rail distance advantage. In addition to the lack of rail infrastructure, waterborne exports of large volumes of bulk commodities (or containers) would likely require substantial investments in new cargo terminals. Also, the Humboldt navigation channel is not as deep as that at most of the competing ports, which would also require a substantial investment. In conclusion, development of rail service to Humboldt County is likely to be both high cost and high risk.

Raw commodities such as coal, iron ore, grain and potash were among the potential commodities that could feasibly support the rail; container shipping, the report says, is too competitive. And under the most optimistic scenario, 11.5 million to 18.5 million metric tons of cargo would need to move across the rail line every year — three to five trains per day. Higher-cost scenarios put that figure at 65 million to 100 million metric tons per year — six to 10 trains a day.

The estimated volume of rail cargo required to make a new rail route to Humboldt County economically feasible would make Humboldt Bay one of the largest bulk ports on the West Coast.

The final Harbor District report is expected to be officially released next week.