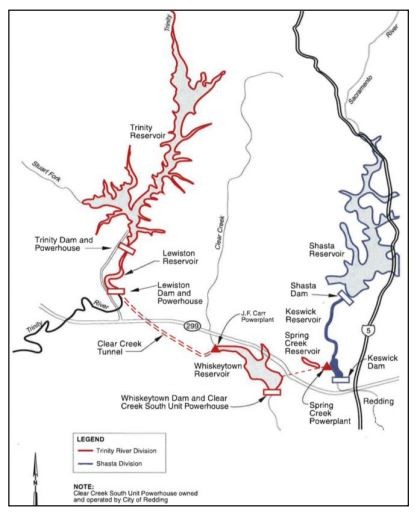 Another round of the all-too-familiar fight over Trinity and Klamath waters has pulled North Coast congressmen and Central Valley irrigators into the mix.

The Bureau of Reclamation (BOR) — which controls the release of water from the Trinity Reservoir — announced last week that it was considering an extra release of Trinity water this year in anticipation of a large salmon run on the Klamath. The bureau similarly upped Trinity River flows last year, in an effort to prevent a repeat of the 2002 fish kill, when low flows and high temperatures on the Klamath contributed to the spread of disease and killed an estimated 33,000 to 65,000 salmon.

Meanwhile, congressmen Jared Huffman, Mike Thompson and George Miller  signed a letter  to Secretary of the Interior Sally Jewell, urging her to respond to questions about the Bureau of Reclamation’s long-term intentions with Trinity River water and to increase flows this year “to avert a potential environmental, economic and cultural disaster.”

View the Bureau of Reclamations proposed release plan online at http://www.usbr.gov/mp/nepa/nepa_projdetails.cfm?Project_ID=14366. Public comment is being accepted until July 31.