July 29, 2013
comment
A crowd of dairy people – including a princess! -- spent a fine afternoon in the old mill lot and field behind the Samoa Cookhouse last Saturday, celebrating the Humboldt County Farm Bureau's 100th anniversary. In fact, Humboldt's farm bureau was the first formed in the state (back in 1913, of course), and the second in the nation.

There was a pie contest – the winning one a tart-sweet, heavenly-pastried peach pie baked by Sandre Dale, who was awarded 100 bucks. 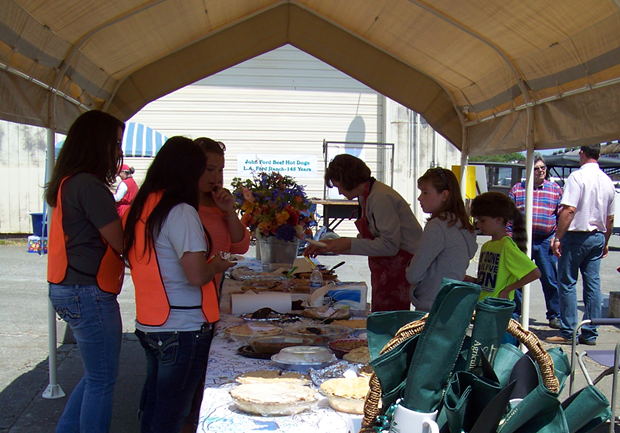 There was melon catapulting by two teams operating towering trebuchets (one more towering than the other, and both sadly a bit far off to the right in this photo):

And more fun, including a competition of barn pictures strung along the walls of the cookhouse's entryway; train car tours and speeder rides; ice cream served up by 2013 Dairy Princess Andrea Guggenbickler and two of her princess alternates, Emily Dale and Paxton Woodward; and displays of some venerable (and some newer)  Humboldt farm families: