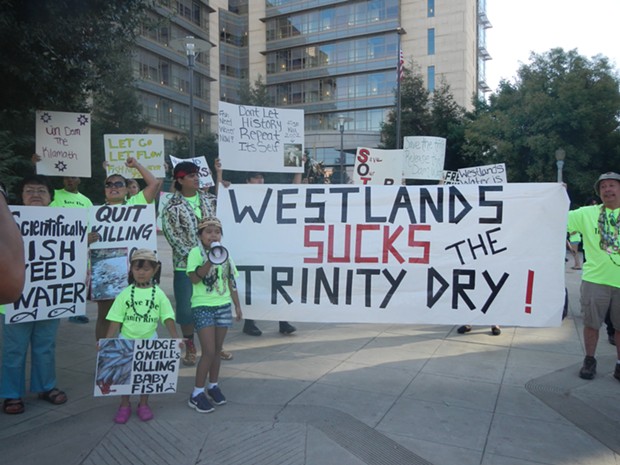 Update: Both the Yurok Tribe and the San Luis & Delta-Mendota Water Authority -- one of the agencies that sued to prevent the release -- released statements following the judge's decision. They can be read below.

Trinity River water will flow. The Fresno judge who issued a restraining order on extra releases from the Trinity Reservoir last week ruled this afternoon to lift the restraining order. See the lead up to the decision here.

"Judge O'Neill seemed to be pressing Tribal and Federal scientist for answers to what salmon need to survive in the Klamath River this year," said Hoopa Valley Tribal biologist Mike Orcutt. " We did our best and hoped and prayed for this decision. The fate of the fish was in the judged hands and he made the right decision"

"The Trinity River is our vessel of life and the salmon are our lifeblood. We applaud the decision to release this water to avert a fish disaster, however this lawsuit demonstrates the need for long term solutions to the fisheries crisis in the Klamath and Trinity Rivers" stated Hoopa Valley Chairwoman, Danielle Vigil-Masten.

A federal judge issued a decision lifting a restraining order holding back releases of Trinity water into the Trinity River to advert a Klamath River fish kill. The decision came after days of protests from a large group of Hoopa Valley Tribal members. Tribal members protested in Fresno, California at the Westlands Water District board meeting on Tuesday and outside the Fresno courtroom, and in Sacramento, California outside a fisheries hearing at the California State Capital building on Wednesday.

The Trinity River is the only out of basin diversion into the Central Valley Project, and is also the Klamath River’s largest tributary. Central Valley Irrigation interests, Westlands Water District and the San Luis & Mendota Water District filed a lawsuit against a government decision to release water for fish on August 7th. The Hoopa Valley Tribe and Pacific Coast Federation of Fishermen’s Associations have intervened in the case on the side of the government.

The ruling, announced just after 5p.m. today, acknowledges the biological importance of supplemental flows for Klamath River salmon in a far-reaching legal case between the Bureau of Reclamation, the Yurok Tribe and others, against Central California industrial agricultural interests.

“The Yurok Tribe will always take whatever measures are necessary to protect the Klamath River, which is our lifeline,” said Yurok Chairman Thomas P. O’Rourke Sr. “We intervened in this case on behalf the salmon and our people.”

In the days to come, the Klamath River flows will increase to 2,800 cubic feet per second, which is the same rate the Yurok fisheries experts made a scientific case for in the Fresno courtroom over the past two days.

Originally, the Bureau of Reclamation, at the Yurok Tribe’s urging, made additional water available as part of an effort to avert a fish kill. The 2002 fish kill occurred on the Yurok Reservation in a year with river conditions much like this one. The water was low and an abundant run of salmon was predicted to return to the Klamath. More than 33,000 Chinook and coho salmon died prior to reaching the spawning grounds.

In early August, Westlands Water District and the San Luis and Delta Mendota Water Authority, both of which represent a large swath of California’s multibillion dollar agricultural industry, filed suit to stop the water from being released. On August 12, a U.S. District Court judge in Fresno, California, issued a Temporary Restraining Order, which halted the delivery of water to the Klamath. Originally, the supplemental flows were slated to begin August 13. All Klamath fish biologists are in agreement that if the water districts’ request for a preliminary injunction was successful and flows left at status quo, there would be a significant risk of another large-scale fish kill on the Klamath.

The Yurok Tribe presented key science to the court with the testimony of its two witnesses, Senior Fisheries Biologist Michael Belchik and Dr. Joshua Strange. The key to the decision was the testimony of Dr. Josh Strange, a former tribal fisheries biologist. Judge Lawrence J. O’Neill cited research completed by Dr. Josh Strange for the Yurok Tribe and noted his experience and background regarding the issues.

This year, 272,000 fall-run salmon are expected to return to the river, nearly 1.7 times the number of fish that returned in 2002. The water release will come just before the majority of the Klamath River salmon begin to migrate upriver to spawn.

“The flows, scientifically justified by written declarations and oral testimony from both of the Yurok Tribal expert witnesses, are nearly identical to those initially proposed by the federal government earlier this month,” said Yurok Fisheries Manager Dave Hillemeier.

While the chances of a fish kill are not completely eliminated, if signs of a looming kill become evident, there is a contingency plan.. If Yurok Tribal monitors, in collaboration with U.S. Fish and Wildlife fish pathologists, start to see significant numbers of diseased fish, the Tribe will seek to have flows doubled for up to seven days. The root cause of the 2002 fish kill was the combination of a low, warm river with inadequate flows and a large run. Two lethal fish diseases were passed between the cramped fish, whose health was already compromised by the overly warm water.

The Klamath River is one of three rivers that produce the majority of the sport and commercial Chinook salmon harvest on the West Coast. The abundance of Klamath fall chinook often determines salmon season along the coast of Oregon and California, as well as throughout the Klamath Basin. A large portion of the water from the Trinity River, the Klamath’s largest tributary, is already piped to the Central Valley. Humboldt County has a claim to 50,000 acre-feet of the exported water, which the Yurok Tribe would like to become available for salmon of the basin.

The Tribe is the largest federally recognized Tribe in California and is the single largest harvester of Klamath River salmon. The Yurok Reservation spans one mile on both sides of the Klamath River for 44 miles, starting at the Pacific Ocean and ending a couple miles upstream of the Klamath’s confluence with the Trinity River.

"Today's decision by Judge O'Neill to lift the temporary restraining order which prevented the release of water from Trinity Reservoir results in a significant decrease in the harm originally expected to occur. Yesterday, the United States reduced their stated need of up to 109,000 acre-feet of water, which they claimed just last week was the amount necessary, to now only 20,000 acre-feet. Clearly the scientific justification they provided last week just couldn't hold up.

"We appreciate Judge O'Neill's understanding of the urgency and importance of this matter. We also recognize the burden he placed upon himself by setting aside his heavy case load to allow for the careful consideration of the question at hand. In his decision, Judge O'Neill stated that, "all parties have prevailed in a significant, responsible way."

"While no one knows whether or not this action will alter what would of happened in its absence, it is clear that in order to move beyond this current conflict we must all work together to develop a lawful long-term approach to managing these requests that is balanced and scientifically supportable."