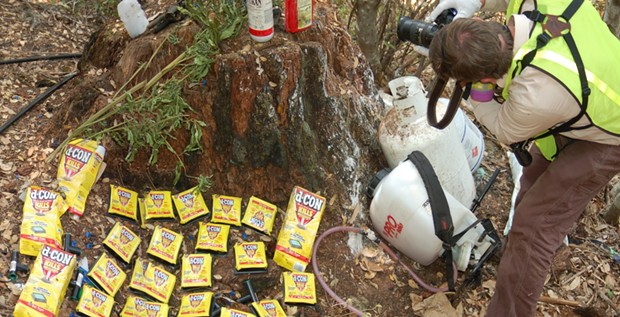 Following on the heels of the somewhat high-profile report this week that poison-laced hot dogs killed a fisher at a Humboldt County grow in July, the Environmental Protection Information Center (EPIC) says it's campaigning to get rat poison off of local shelves.

EPIC says it's trying to convince retailers to voluntarily ban the sale of "second generation anticoagulant rodenticides" like d-CON. County supes passed a resolution in May urging the same, to the consternation of one poison-industrial-complex rep.

It's not just irresponsible growers using these toxins that put people at risk, EPIC says, though it cites a study in its press release that says 80 percent of fishers found dead by researchers between 2006 and 2011 had been exposed to rodenticides. (The July fisher — the first confirmed intentional poisoning of a fisher — was determined to have died from insecticides, though rodenticides were also found in its system.) Residences and businesses should also seek alternatives, EPIC says. "We don’t have to poison our families and wildlife to live and work in rural Northwest California."