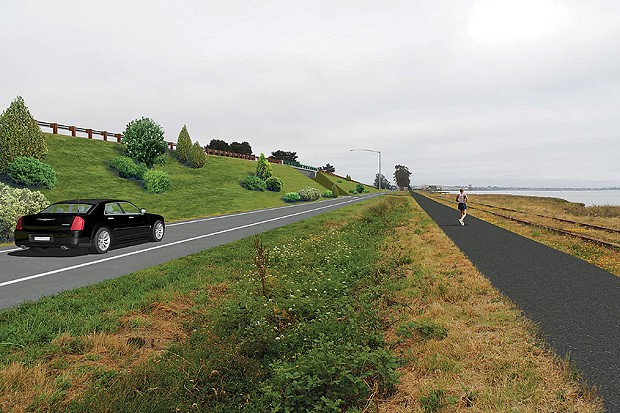 Perhaps nervous about Thursday's Coastal Commission hearing, Caltrans has agreed that construction on the proposed "Eureka-Arcata 101 Corridor Improvement Project" won't begin until funding is secured for a bay trail along the same stretch. And it has reiterated a promise to throw in $1 million of its own funds toward the trail.

Now, cynics might point out that the devil is in the details: How much funding? Enough to build a quality trail?

But the big question for now is whether this promise will be enough to convince the Coastal Commission to approve the project.

ADDENDUM: The Coastal Commission's latest staff report (big pdf file here) is even more explicit about Caltrans' trail responsibility. Commission staff says that, in order to be compliant with the Coastal Act, Caltrans needs, among other things, to:

Provide for a separated bicycle/pedestrian corridor on one or both sides of the highway along the entire Corridor, unless Caltrans commits, at this time, that it will establish to the Commission’s satisfaction that an alternative parallel trail nearby (from Arcata to Eureka) will be funded prior to or concurrent with construction of the 101 Corridor and that it will have the necessary ownership interests or permissions to be allowed to proceed.


Here's the press release from Caltrans:

Caltrans will make a presentation to the California Coastal Commission on Thursday, September 12 at the Wharfinger Building in Eureka in support of Coastal Consistency for the proposed Eureka-Arcata 101 Corridor Improvement Project. The public is encouraged to attend and comment on this long term safety and operational improvement project for this vital transportation corridor.

As a condition of Coastal Consistency, Caltrans has agreed that project construction will not begin before funding is secured for a bay trail project. This funding will include $1 million from Caltrans. The Humboldt County Association of Governments (HCAOG) is also seeking to secure funding for the bay trail project.

The proposed project’s improvements include a half-signal at Airport Road, a grade separation at Indianola Road, as well as closing median openings to improve safety and reduce delays in the corridor. Caltrans has received concurrence from the Environmental Protection Agency, U.S. Fish and Wildlife Service, and the U.S. Army Corps of Engineers. For more information, Caltrans has a project information blog located at: EurekaArcataCorridor.wordpress.com.