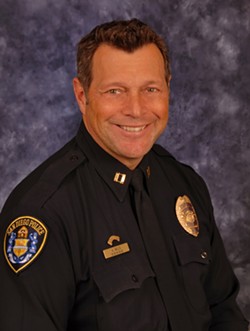 After a frustrated withdrawal by previous front-runner Michael Johnson, Eureka City Manager Bill Panos today announced that Andrew G. Mills, a former commanding officer in San Diego, is slated to be the next chief of the Eureka Police Department. The Eureka City Council plans to confirm Mills at its Oct. 1 meeting, according to a press release, and he's scheduled to start on Nov. 4.

Eureka City Manager, William T. Panos has recommended the appointment of Andrew G. Mills to serve as Eureka Police Chief. Mills is a national award winning law enforcement professional and brings years of command and community policing experience to the position. The Eureka City Council plans to confirm the new Police Chief at the next City Council meeting on October 1, 2013. Mills is scheduled to start on November 4, 2013.

“After a comprehensive search, I am very pleased that we have found an outstanding candidate to serve as our police chief. His experience in key command positions and extensive experience with community policing is a strong asset to our city. I look forward to working with him,” said Mayor Frank Jäger.

Most recently, he was the commanding officer of San Diego’s Western Division responsible for patrol and investigations for over 140,000 residents, the airport and large business districts. In that part of San Diego he also led efforts with the mental health community to handle a large homeless population, increased efforts to reduce violent street robberies and transformed their neighborhood watch programs.