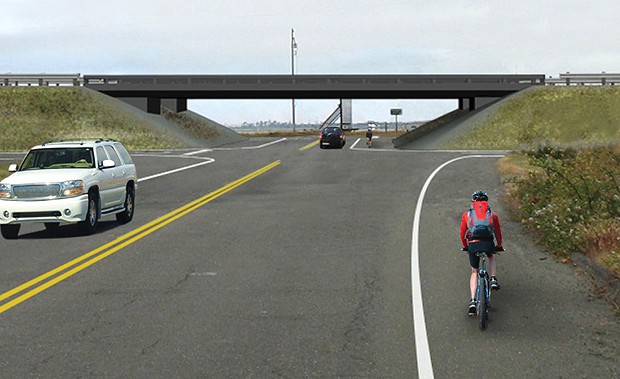 Going against its own staff's recommendation, the California Coastal Commission this evening voted 9-1 to give a conditional federal consistency determination (translation: a go-ahead) to Caltrans' proposed project for the 101 corridor between Arcata and Eureka.

And that's not all: The "conditional" part of the approval means that Caltrans will have to address a number of community concerns before a Coastal Development Permit will be issued.

First off, Caltrans must include a Class 1 bicycle trail (definition here) in its project design.

Secondly, Caltrans must submit a plan to remove not just the one billboard it planned to take down (at Indianola) but all of the billboards along the corridor, to the extent feasible. (With all the jurisdictions involved this likely won't wind up being every last billboard, but still: Many of those suckers will come down.)

And third, Caltrans must integrate sea-level-rise analysis in its design.

The decision came after several hours of public testimony, the majority of which was in favor of the project. As designed, the project includes median closures at most intersections, a half signal at Airport Boulevard and an interchange (conceptually pictured above) at Indianola Boulevard. (For background, see last week's cover story.)

That interchange was the major point of contention between Caltrans and commission staff. The staff argued that the over/under-pass could induce development in the Indianola area, created a visual blight and would have a more significant impact on the environment than a fully signalized intersection (staff's recommendation for Indianola).

Representatives of local environmental groups including Humboldt Baykeeper, the North Coast Environmental Center and the Environmental Protection Information Center (EPIC) all urged the commission to deny the project and tell Caltrans to go back to the drawing board. The groups all suggested that other design alternatives — such as roundabouts or "Michigan lefts" at Indianola — were never fully considered by Caltrans.

But elected officials, including County Supervisors Mark Lovelace and Rex Bohn and Arcata City Councilmembers Susan Ornelas and Mark Wheetley, along with a number of local business owners and government workers, urged the commission to move forward with the project due to safety concerns.

Commission members had taken a tour of the corridor yesterday to understand the context, and Commissioner Jana Zimmer got the biggest laugh of the day when she described the experience of crossing 101 at Indianola.

"I don’t know whose idea it was to put us in a bus with no seat belts and cross that intersection — two times," she said, "but it had an effect."

Caltrans can now move forward with the project while incorporating the conditions set forth by the commission. It will still need to obtain a Coastal Development Permit before construction begins.