HSU President Rollin Richmond To Retire After This School Year 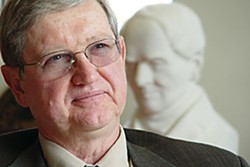 He sent the announcement out via email this morning.

I write to inform you that I have decided to retire at the end of this academic year. I have enjoyed my years serving you and believe that we have made real progress at the university over my years of leadership, despite the state's economic struggles.

Over the last eleven years, together we have made substantial improvements in our curricula, shared governance and physical facilities. All of these changes have resulted in better experiences for our students, faculty and staff. Our service to our community is widely recognized as a most important contribution.

I believe this university presents a unique opportunity for individuals interested in academic administration. I am confident that our Trustees and Chancellor will be able to attract a new President who will appreciate the successful initiatives created by our students, staff and faculty and be anxious to help you mold the next century for Humboldt State University.


ADDENDUM: HSU Spokesman Paul Mann issued a press release with a first draft of Richmond's legacy at the school as well as info on what comes next:

In coming weeks, the Chancellor and Board of Trustees will share information about the process for selecting a new president.

Richmond is the sixth President to have led Humboldt State. His announcement comes as Humboldt State celebrates its Centennial Year, and as the campus is finally seeing some reinvestment by the state after many years of dramatic budget cuts to higher education.

President Richmond arrived on campus in 2002, and was immediately impressed by the high level of campus involvement and commitment to social justice he found among students. He has frequently described Humboldt State students as fundamentally different than others he has encountered, in that they are so focused on making a difference in the world.

Over the years, Richmond has worked to involve students in campus decision-making. He has strongly supported student-led efforts to make changes, such as creation of the Humboldt Energy Independence Fund. Richmond has also worked with many students individually, frequently serving as a mentor or taking a personal interest in assisting students facing personal challenges.

Richmond has pushed the campus to diversify, and students from underrepresented groups now make up 31 percent of the student body. That is up from 13 percent a decade ago.

During Richmond’s time at HSU, the campus has placed increasing emphasis on research by faculty and students. He has stressed that such research complements teaching and enriches the student experience. He has also promoted the use of new teaching approaches, including use of technology, to improve student learning.

Beyond campus, Richmond worked to expand research opportunities across the California State University system. He was instrumental in gaining research funding for CSU campuses through the California Institute for Regenerative Medicine, and he has contributed to CSU system efforts like CSUPERB (CSU Program for Education and Research in Biotechnology), COAST (Council on Ocean Affairs, Science and Technology), and the Agricultural Research Initiative. He has served as the CSU representative on the California Council for Science and Technology.

President Richmond has also focused on enhancing the university’s relationship with the community. He frequently attends government meetings and community events, and he eagerly joins efforts to help children and improve the local economy. He has supported many efforts on campus to develop partnerships in the community, including programs to seek grant support, assist with business development and conduct policy research. Many observers credit Richmond for town-gown relations that are the strongest in decades. In addition, he has focused attention on the need to encourage alumni and others to support the university. He established a new Advancement Foundation, and under his leadership the campus endowment has more than doubled over the last decade. In 2006, the university established its first endowed chair – the Kenneth L. Fisher Chair in Redwood Forest Ecology.

Richmond helped steward Humboldt State through many years of state budget cuts, including the severe reductions during the most recent recession. At the same time, he was able to gain state funding for substantial physical improvements to the campus. Most notably, the campus completed the Behavioral and Social Sciences classroom building, the Kinesiology and Athletics Building, and the College Creek Apartments.

Prior to coming to Humboldt State, Richmond was Provost and Professor at Iowa State University, and he previously served as a distinguished faculty member and researcher at numerous institutions. His research has been in the area of evolutionary biology. He won grants from the National Institutes of Health and National Science Foundation, and he has published more than 80 articles in his field. Richmond earned his bachelor’s degree in Zoology from San Diego State University and his doctorate in Genetics from The Rockefeller University in New York.

Rollin and Ann Richmond plan to continue living in Humboldt County, and to remain involved in efforts to help children and strengthen the community. They also plan to spend more time visiting with their grandchildren.