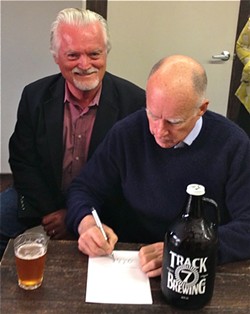 Any growler will do, at any brewery — Lost Coast, Six Rivers, Redwood Curtain, you name it — come Jan. 1. That's when Assemblymember Wes Chesbro's growler bill goes into effect.

A growler (shh, Kiwi!) is a glass beer vessel about 4-pints-hearty, in which beer connoisseurs and picky drunks enjoy refills of fresh-crafted local brews straight from a brewery. Current state law says a growler can only be used in the brewery where it was purchased. Ches' new law, AB 647 — signed today by Gov. Jerry Brown, says a news release — scraps that old piece of prudery and allows a brewery to refill any growler as long as it slaps a new label on the bottle with its name, and the beer's name, on it. The new label has to cover any old labels on the bottle.

“Growlers have become an increasingly popular way for customers to buy beer because it allows them to sample and safely transport craft brews to their homes to enjoy," says Chesbro in the release. "They won’t have to buy a growler for every brewery they enjoy, which promotes the reuse of glass containers.”

It also promotes fun and coolness at those backyard BBQs.

We wrote about this pressing issue previously, here.