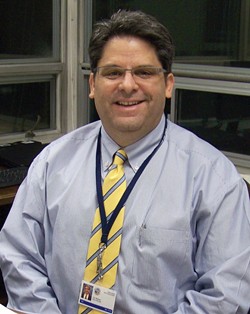 UPDATE: Eureka Mayor Frank Jager says Panos has indeed left the building, and the items on next week's agenda are strictly procedural.

Jager says he put the items on the agenda per Councilmember Mike Newman's request. The first item sounds like it stemmed from concerns Newman had over city council members going directly to the city manager individually, rather than giving him direction as a council.

The second — the "performance evaluation" — is related to the search for the next city manager and what attributes the council is looking for, says Jager.

Help us figure this out:

Eureka City Manager Bill Panos submitted his resignation almost a month ago, and his final day was supposed to be Oct. 4. So why is the city council still talking about him in closed session?

We've made a couple of calls, but no one's willing to talk about a closed-session item. A voicemail left for Panos was not immediately returned.

Help us out here, Humboldt. What's the deal?