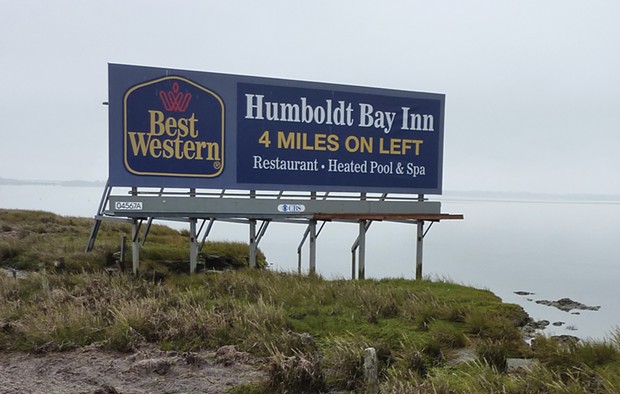 Looks like the company that owns all those billboards between Arcata and Eureka just recently found out that the Coastal Commission wants them all torn down. It's response? "You can't make us!"

That's a rough translation of the comically wordy lawyer-speak contained in  a letter  from attorney Anthony M. Leones of Miller Starr Regalia on behalf of CBS Outdoor Inc., owners of the billboards. What Leones actually wrote was, "The illegalities that inhere to these proposed actions are of a constitutional size." (Jeepers!)

In plain English, the deal is this: Back in September, the California Coastal Commission approved Caltrans' plans for a safety-improvement project on the 101 corridor between Arcata and Eureka, but it also tacked on some conditions. Among them: Caltrans must get all the billboards along that stretch taken down, "to the maximum extent feasible," as a way to counterbalance the ugliness of a new underpass at the Indianola Blvd. intersection. (Billboard removal is a goal locals have been trying to attain for years.)

CBS Outdoor Inc. says through its lawyers that the condition is illegal because:

a) removing the billboards isn't necessary to complete the project, so it doesn't qualify under the rules of eminent domain

b) Caltrans' proposed underpass will be less than a mile long, so it doesn't make sense to remove billboards along the corridor's entire length, and


Plus, the verbose lawyer argues, the Coastal Commission should have told CBS Outdoor Inc. about this whole thing sooner. In closing, the letter "respectfully requests" that the commission "rescind any actions it previously has taken with regard to the removal of billboards, and modify the current proposal to limit the scope of such removal in a manner that satisfies all applicable law."

This being Veterans Day, the Coastal Commission could not be reached for comment.

UPDATE, 11/12: Humboldt Baykeeper today issued a strongly worded press release (click  here  for the pdf) urging the Coastal Commission not to "cave in to billboard bullies." The release points out that since Caltrans issues permits under the Outdoor Advertising Act, it can rescind that permission if it damn well pleases. Baykeeper Executive Director Jessica Hall is quoted saying, "The Coastal Commission should stand up to corporate freeloaders of public space – something Caltrans has refused to do all these years.”