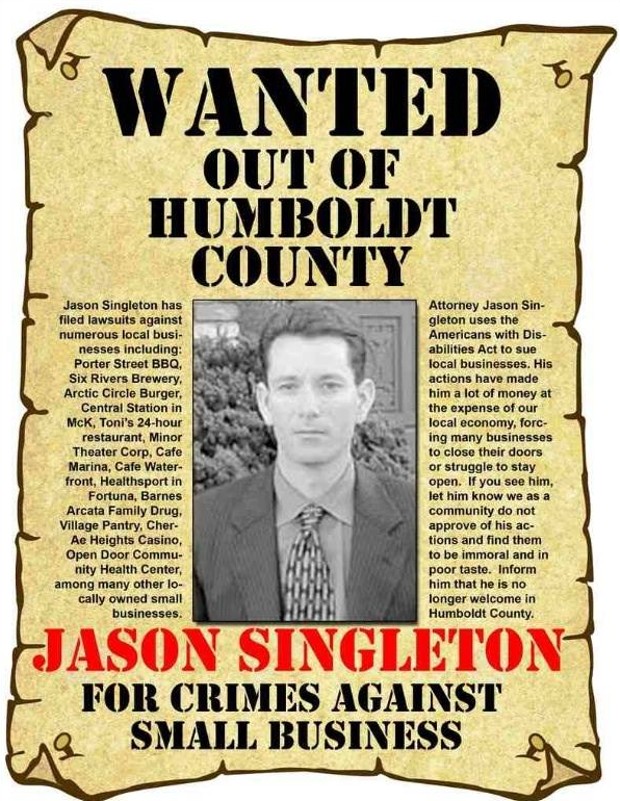 is floating around, a special “get-out-of-town” for Jason  Singleton,  the  Eureka-based attorney whose Americans With Disabilities Act lawsuits have led some businesses in Humboldt County and elsewhere to shut down under the crushing costs.

Instead of being considered a hero for the disabled, Singleton is un-revered by many — a “wolf in sheep’s clothing,” according to Carmichael-based attorney Catherine Corfee, who told the Journal several years ago that there are valid ADA cases out there ... just not Singleton's.

The latest suit-provoked closure to piss off Singleton's Humboldt neighbors is that of Porter Street Barbeque in Arcata, which gave up last month. The owner, Scott Seelye, told the Mad River Union's Jack Durham "the restaurant was barely getting by, sometimes struggling" and he couldn't afford the $40,000-some in upgrades Singleton's suit demanded. Seelye also told the Union that, 18 years ago when he opened the restaurant, he got all the permits required.