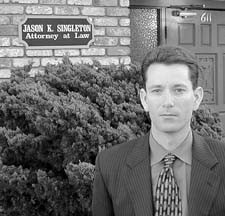 The most hated man in Humboldt, whose recent threat of an American Disabilities Act lawsuit was blamed for the closure of Porter Street Barbecue in Arcata, reached out to the  Journal with a rebuttal this morning. Jason K. Singleton, who practices law in Eureka, was the subject this week of a viral wanted poster. Calls for vengeance circulating through social media ranged into the cringe-worthy, but Singleton's ADA suits have been riling up the community for quite a few years.

California adopted its access regulations, incorporated into the state building code, in 1982. The ADA became effective in 1994. 20 years ago. The issue of access for people with disabilities has been in the media many many times over the years. Any facility that claims, as many do, "that we did not have notice we had to provide access", is intentionally putting their head in the sand. Moreover, every single client of mine sends a letter asking for access long before any legal action. Every time, without fail, for over a decade.

The vitriol that surrounds this issue stems from the fact that people with disabilities remind the able bodied of their mortality. Yes Virginia, we are all going to grow old and be disabled. Look into the deep recesses of your subconscious and come to terms with this fact. In a culture that worships youth and beauty, this is more than some can take.
Given the radical boom bust cycle of the real estate market in recent years, there are more than a handful of lease agreements which are presently unfavorable to either the landlord or the tenant. If a landlord or tenant chooses to use the cost of remediating barriers to access as a vehicle to end a lease, that is their issue. I cannot comment on any particular case.

I can say that the dollars that were spent at any closed facility have not left the county. They will be spent at some other business, very likely one that is accessible.
No one seems to have an issue with the idea that if a business cannot be profitable if it makes payroll tax deposits, workman's compensation premiums, and complies with food safety regulations, that it should close. But when it comes to providing access for people with disabilities, the same premise does not apply. Well wake up and smell the coffee. Access for people with disabilities is not charity. It is a civil right.

There are federal tax credits available for money spent to remove barriers to access. This has been true, every year, since 1994. A dollar for dollar reduction of tax obligation. A facility that claims they cannot afford to provide access, is: 1. Misinformed. 2. Barely profitable anyway. or, 3. Lying.

My advocacy in Humboldt County over the last 16 years has done more to improve access for people with disabilities and remove architectural barriers than any one person in the County's history. You only hear in the media about the lawsuits. What is not in the media is the hundreds of letters my office and my clients have written that obtain access without a lawsuit.

The enforcement mechanism chosen by Congress and the State of California is effective, however draconian in some circumstances. It does work though. Unlike the building departments which frequently do not. If you do not like the law, propose something better to your legislator. In the interim, feel free to continue to place this issue in the media. It renders the letters my clients write prior to litigation, rather receptive to the recipients, and on whole, makes litigation less likely.