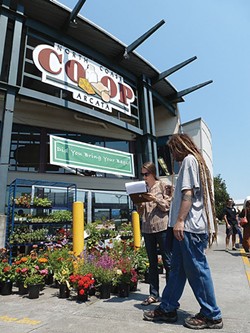 After half a year of dickering and angst, North Coast Co-op management and its United Food and Commercial Workers Union Local 5 employees have ratified the new contract they tentatively agreed upon in November — 81 percent of the union members voted for it.

According to the Co-op, the contract includes 5 percent annual raises for wage employees until they max out on the wage scale. It also allows Co-op workers to retain their health plan at the same cost for a year (it has a $350 deductible) — after that, any increases will be "based on actual plan costs."

There are other provisions, including a "winter solstice bonus" because, you know, this is Humboldt:

"In addition, the Co-op will begin offering a second policy option with a lower cost and higher deductible for employees who find a lower premium option preferable. The total benefits package to both full time and part time Co-op employees includes: medical, dental and vision coverage; affordable dependent health insurance coverage; life insurance; 401(k) match up to 5%; paid time off; winter solstice bonus; discounted gym membership as well as free food in the break rooms. In addition, all Co-op employees receive a 15 percent discount on their purchases from the Co-op every day."