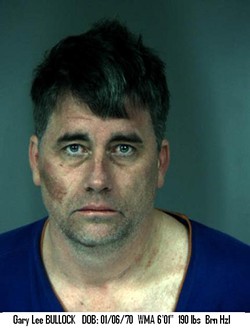 UPDATE: Bullock was arrested by Sheriff's deputies in Southern Humboldt. From a press release:

Detectives from the Eureka Police Department are currently enroute to the Garberville Substation to take custody of Bullock and to continue the investigation.

The Eureka Police Department would like to thank our allied agencies, especially the Humboldt Sheriff’s Department, for their invaluable assistance with this investigation. The quick and successful apprehension of Bullock was the result of this joint working relationship. No further details regarding the arrest and the vehicle recovery are available at this time.

Eureka Police named a suspect this morning in the New Year’s slaying of Eureka Pastor Eric Freed — a Redway man who was arrested and released within a day of the killing.

Eureka Chief Andy Mills told a crowded press conference that police are looking for 43-year-old Gary Lee Bullock, who they believe forced his way into the church rectory overnight and got into a violent struggle with Freed. The pastor was found around 9 a.m. Wednesday by church parishioners and declared dead shortly after police arrived.
“We don’t know the motivation for this crime, certainly it doesn’t appear that the father did anything to precipitate this event, however we do not see this as an ongoing threat to the community,” Mills said.

Bullock had multiple run-ins with police and a security guard on New Year’s Eve. He was arrested by sheriff’s deputies in Garberville on Dec. 31 on suspicion of public intoxication and taken to the Humboldt County jail, where he was turned away by jail staff for having high blood pressure and being “somewhat combative,” according to Sheriff Mike Downey. Jail staff wanted Bullock to be cleared by a doctor before being booked, Downey said. After being examined at a local hospital, Bullock was returned to the jail where he was held for “eight to 10 hours.”

Bullock was released from jail after midnight on Jan. 1. Eureka police officers responded to the report of a suspicious person at St. Bernard Church around 2 a.m. and spoke with Bullock. Officers determined he wasn’t intoxicated and “did not qualify for a psychiatric hold,” according to Mills, and Bullock was referred to an emergency shelter. Later that morning a security guard near the church asked someone matching Bullock’s description to leave the area. Freed was found dead later that morning.

Bullock’s whereabouts are unknown, but Mills said investigators are looking for him in several places around California. Mills reiterated that he believed Bullock was not a threat to the community. “I think that he knows what he has done and is trying to distance himself from this crime,” Mills said. “His ability to harm other people? Certainly, anybody has that ability, but is he in the mindset to do that right now? I don’t believe so. Was this a crime of opportunity or a specifically targeted person? We’re just not sure. So at this point we don’t see a significant history of violence in his past where it would indicate to us that other people are at risk.”

Mills said it appears Freed suffered from blunt force trauma. An autopsy is scheduled for Saturday.

Bullock’s last known residence was Redway, according to police. A criminal file at the Humboldt County Courthouse shows one arrest for possession of cocaine in November 2012, a case that was pleaded down to a misdemeanor.

Mills said he believes evidence at the scene ties Bullock to the crime, and said there is surveillance video as well. Police are still seeking Freed’s car — a gray hybrid Nissan Altima — though they are uncertain if Bullock took the car.