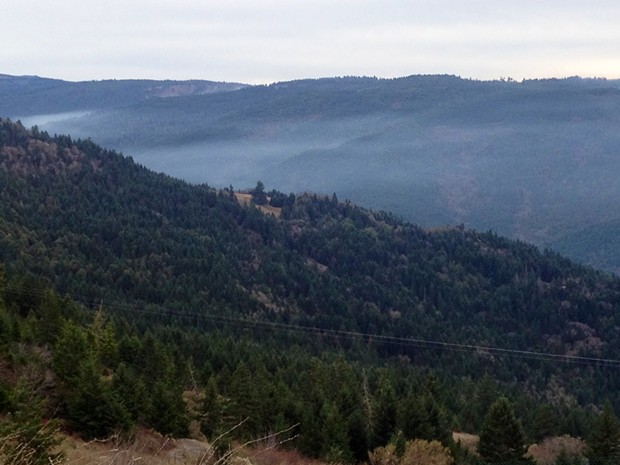 We’re not even 10 days into the New Year and, already, in Humboldt and Del Norte counties, at least 10 wildfires have sprouted in our tinder-dry January hills. January. Wildfires.

This means, after an already smoke-filled summer and fall, yet another round of cough-inducing days in places like, for instance, the Hoopa Valley, where wildfire smoke tends to settle in and stay awhile. It also means hundreds of firefighting personnel have had to be pulled in from other California counties to help — and mostly captains and engine operators, who are permanent hires, because the seasonal firefighters are on seasonal layoff. Local fire departments have also sent personnel out to help with the fires, and a few seasonals have been hired back, Duncan says.

Luckily, most of these fires have been small and quickly extinguished, Duncan says. But at least one — the Red Fire, which started midday Jan. 4 on private timberland in the Snow Camp area, south of Berry Summit and about 30 miles east of Blue Lake — had burned around 350 acres as of this Tuesday afternoon. It was 65 percent contained, with full containment expected by Thursday. Another fire that also started Jan. 4, the Bridge Fire near Bridgeville, burned 18 acres before it was fully contained. The rest of the fires — including in Pecwan, Crescent City and Garberville — were mostly smaller than 3 acres. No structures have burned so far.

The causes of nine of these fires are still being investigated. Another — a wildfire in Petrolia dubbed the Light Fire — began Jan. 5 after a private landowner’s controlled burn escaped, says Duncan. Yes, the landowner, whom Duncan says was burning on a no-burn day, will be fined.

In these kinds of conditions, Duncan says, people should be extra mindful to heed those no-burn days. “They should not be burning on those days,” he says. And that’s not just because the trees and grass are ready to gallop into flames, in these dry conditions. It’s because of the smoke. No-burn days are the ones where there’s predicted to be high pressure, a stable air mass and very little wind —  “it’s basically like putting a lot of smoke under the lid of a kettle,” Duncan explains.