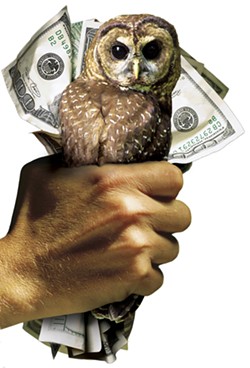 Former Yurok Tribe Forestry Director Roland Raymond was sentenced to serve three years in federal prison today for his role in an embezzlement scheme that bilked nearly $1 million in federal funds from the tribe.

Raymond, 50, faced a maximum of five years in federal prison after pleading guilty to a single count of conspiring to embezzle from an Indian tribal organization, but received a lesser sentence, in part, due to his cooperation with a federal investigation that led to the charging of one of his alleged co-conspirators, Mad River Biologists founder Ron LeValley. Read the Journal's previous coverage here.

Today, U.S. District Judge William Alsup handed down Raymond’ sentence and ordered him to repay $852,000 he stole from the tribe — money Raymond’s attorney, Randall Davis, claims was taken to support his client’s drug and gambling addictions.

In his plea agreement, Raymond admitted to working with LeValley to employ an elaborate system of fake invoices, false purchase requests and money transfers to embezzle more than $870,000 from the tribe during a three-year period of wildlife preservation studies. Under the scheme, Mad River Biologists would submit invoices to the tribe for survey work it hadn’t performed, according to court documents. When checks came from the tribe, LeValley would allegedly route the money back to Raymond after taking a percentage off the top.

The surveys that were allegedly never conducted were primarily looking for habitats for the federally endangered northern spotted owl to determine which tracts of tribal properties could be logged without impacting owl populations. It’s unclear whether the alleged conspiracy impacted timber harvest plans or led to the destruction of sensitive habitats.

According to his plea agreement, Raymond initially told LeValley that the scheme would provide Raymond with funds needed to pay tribal and forest crews, though court documents indicate the pilfered funds were never used to that end.

Raymond, who served as the tribe’s forestry director for 17 years, developed a drug addiction after undergoing a medical procedure that saw him prescribed opiate pain killers, according to his attorney. He was on house arrest in the case until late October, when he was remanded to federal custody after violating the terms of his release by testing positive for methamphetamine, according to court documents in the case.

In a finding of fact filed prior to Raymond’s sentencing Monday, Alsup determined that Raymond lied to the court at a hearing in November when he said while arguing against a delay in sentencing in the case that he’d been assaulted numerous times while in federal custody.

Alsup held an evidentiary hearing on the subject and found that no such attacks occurred and that Raymond lied to the court.

“In the undersigned’s view, this is consistent with a pattern of misrepresentations that underlie defendant’s offense of conspiracy to commit embezzlement and theft from his tribe,” Alsup wrote.

Federal prosecutors had sought a 20-month prison sentence for Raymond, but lobbied the court for a 27-month sentence after learning of Raymond’s dishonesty. For his part, Davis urged the court to agree to the 20-month sentence, but asked that his client be given credit for time already served behind bars in the case, which would have left Raymond looking at approximately six months in federal prison.

Ultimately, Alsup decided the sentence being pushed by prosecutors wasn’t harsh enough and handed down the 36-month term, according to court documents, though it is not immediately clear if Raymond was given credit for time served.

Meanwhile, LeValley — who also faces a single count of conspiring to embezzle from an Indian tribal organization — is reportedly working toward a plea deal of his own with prosecutors. He is due back in court Feb. 11, when he is expected to enter a guilty plea in the case, according to court documents.