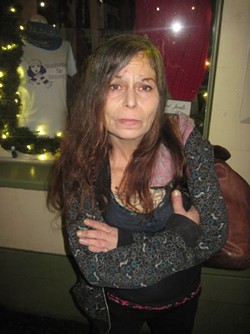 Old Town businesses are breathing a little easier after Eureka Police reported arresting a woman Tuesday night they believe may be responsible for a string of robberies.

“My hope is that the rough start to 2014 is coming to a close and we can all move forward in more positive ways from here,” said Astra Burke, owner of the recently robbed Many Hands Gallery, in an e-mail to the Journal.

After being sighted multiple times in the Old Town area in the last couple of weeks, Judy Lynn Long was arrested Tuesday on suspicion of robbing Many Hands Gallery on Saturday and Belle Starr, a nearby clothing store, on Jan. 9. Police have also named Long as a person of interest in a third armed robbery, of the Old Town store Gypsy Sisters on Dec. 22.

Old Town business employees had come to be on the lookout for Long, who makes a striking figure. She is easily identifiable as a short-statured woman, standing 5 feet, 2 inches tall, and is missing both eyebrows and most of her teeth. In all three robberies, the suspect followed a similar modus operandi: waiting until evening when foot traffic had slowed and employees were alone in the store, before piling multiple items on the counter as though to make a purchase, only to brandish a weapon and demand all the money in the register.

In the case of the Gypsy Sisters robbery, the suspect drew a knife on store employee Kristen Miller.

"Seriously, are you robbing me right now?" Miller remembers saying to the woman. Initially she says she considered fighting back but decided to follow protocol and handed over the contents of the cash register. The woman also stole what Miller reports to have been $300-$400 worth of clothing.

Unsatisfied with the responding officer's progress on the case, Miller said she took it upon herself to visit neighboring businesses and give them a description of the robber, whom she feels certain was Long. Miller was out of town for the holidays when the owner of Shipwreck, on 3rd Street, detained a woman matching Long's description and called the police. An officer came and took photos but did not make an arrest. In the press release announcing the arrest the included photo is of Judy Long standing in front of Shipwreck. Her eyebrows appear have been drawn on with a pencil.

Following the robberies, many business owners began taking precautions to protect their employees. Gypsy Sisters moved their closing hours to 5 p.m., the same time as neighboring Coco Cuvee, so that employees at the two stores could watch out for one another. Jennifer Grisso, a barista at Old Town Coffee and Chocolates, began carrying mace. She and other employees at the cafe say that they, too, had seen a woman matching Long's description in the neighborhood.

In an email written before Long’s arrest, Burke described the situation as a “travesty.”

“Despite our fair share of issues with the 'local flavor' over the years, nothing remotely this personally invasive has ever occurred in our little business community,” the Many Hands Gallery owner wrote. “We are in the midst of the off season here in Old Town,—it is challenging enough without having our money and our property stolen from us. This time of year we depend on local community support, and this year more than ever we will need it.”