EPD's Harpham calls it a career after 56 years 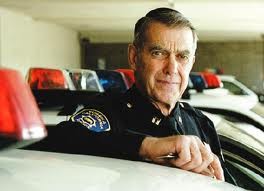 Today, for the first time in 56 years, Eureka Police officers took to the streets without Murl Harpham in their ranks.

“It’s really the end of an era for the department,” said Mayor Frank Jager, marveling at Harpham’s career, which spanned six decades and saw him fill in as the department’s chief on four separate occasions before he officially retired as a captain Wednesday.

Harpham started with the department as a bushy-tailed 22-year-old on June 15, 1957. For those keeping track, that was the same year the Soviet Union launched Sputnik to ignite the space race and a year before the advent of Legos. Closer to home, it was two years before the Humboldt County Courthouse was built and seven years before the founding of College of the Redwoods.

It’s kind of wild to think about how much the world has changed as Harpham has policed Eureka, Jager mused, noting that when he started with the department in 1971, Harpham was already a sergeant there. At that time, officers did without radios and cell phones, and typed their reports on carbon paper so they could send a copy off to the district attorney’s office and keep another for their records. “He was a real mentor to all the officers that came on at that time,” Jager recalled. “He just kind of had that macho police officer presence about him, and he was a good sergeant.”

Born and raised near Everett, Wash., Harpham came to the area on a football scholarship to play end and defensive back at Humboldt State University. After taking some journalism classes in school, Harpham landed a job as a cub reporter at the Humboldt Times and wound up on the cop beat. One day, the chief of police told he could make a good deal more money doing police work than just writing about it. Harpham decided to give it a try. Fifty-six years later, he said he doesn’t remember how to do much else.

Reached Wednesday, Harpham said retirement hadn’t quite sunk in, saying “it feels like any other day.” He said he hasn’t quite figured out what what’s next. “I haven’t really thought that long ahead. I’ve done this for so long, I don’t know anything else. I’ve done this for almost 57 years. If I live to be 114, I would have still put half my life into this police department.”

Though Harpham is still working to figure exactly what retirement will look like, at least part of it will be familiar, as he’s been asked to work a handful of hours a week at EPD coordinating the department’s efforts to recruit volunteers to help with records, do crime prevention trainings and other things to help the stretched department make the most of its resources. “He has so many people in town that know him and love him, I’m going to use that relational power to seek out volunteers for the department,” EPD Chief Andrew Mills said.

Mills said he’s hopeful the arrangement will provide a maximum return on a minimal investment for the department, and that Harpham will also be able to spruce up the department’s volunteer patrols. But, the chief said, it’s a new arrangement and both sides will have to see how it goes, with either free to walk away if it doesn’t turn out to their liking. For his part, Harpham said he’s happy to give it a go and to stay involved with the department in some way.

Looking back on his 56 years of policing, Harpham said it’s been a good ride, chuckling as he remembered his first day, when then-chief Cedric Emenhiser handed him a penal code and a municipal code, telling him to study up before he’d let him out of the station. Asked about his proudest moment, Harpham said there’s too much to sift through — the baby he delivered in the back of his patrol car, the rape-in-progress he busted up, the armed robbers he caught in the act. “Having been there so long, some of those things were bound to happen,” he added.

But Harpham’s lengthy tenure at EPD has not been without controversy. In 2007, a then interim Chief Harpham infamously declared that methamphetamine was “turning our community into a hellhole. “ More recently, he was alleged to have played a leadership role in EPD’s insurrection against former Chief Garr Nielsen and he oversaw the department’s controversially heavy-handed response to the Occupy Eureka protests on the courthouse lawn. In a sense, at least in recent years, Harpham has become a polarizing figure — loved by some and vilified by others.

Mills said he’s learned a lot from Harpham since taking over the chief’s position a few months ago. Most importantly, Mills said, Harpham has helped him navigate his transition from the world of big-city San Diego to small-town Eureka. “I think the main way Murl has been helpful to me is bringing context to thing, and helping me understand the interconnectedness of the city,” Mills said, noting that navigating the web of relationships in Humboldt can be tricky. “Plus, he’s such a down-home, folksy kind of guy that can really communicate with people and talk with people. That’s been helpful.”

Jager confessed that he worries retirement might be a tough transition for Harpham, who’s lived in law enforcement for more than a half century. “This is going to be a tremendous change for Murl and I hope he does OK,” the mayor said, before again dubbing Harpham’s retirement the end of an era for EPD. “Murl has always been there. It’s a big change.”