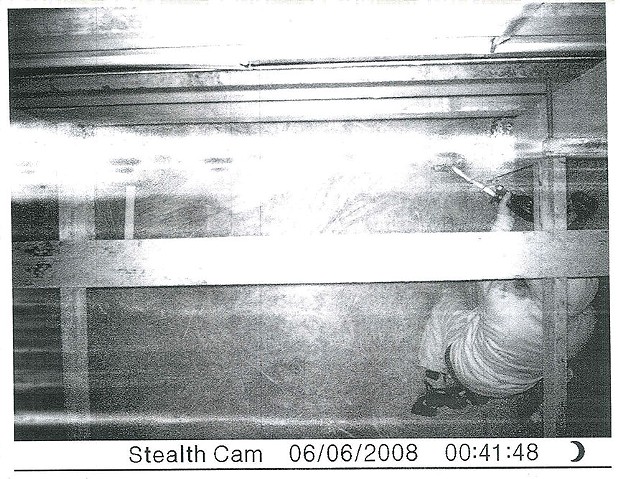 The image of the vandal responsible for the third billboard toppling this month was captured earlier this week on a camera installed by a now thrice-bitten local sign management company.

Peeved by the nighttime saw-wielding maniac's previous crimes and anticipating further demolition, All Points Signs installed infrared wildlife cameras on a sign west of Highway 101 and 200 yards north of Bayside Cutoff. Overnight Sunday, the camera caught the chilling image above — a birds-eye shot of a hooded saboteur sinking the teeth of a Sawzall into a CBS Outdoor-owned billboard. A Sheriff's Office deputy began investigating the $20,000 vandalism the next morning.

But, despite the sign company's efforts, not much can be gleaned from the video. It "appears to be a male," the Sheriff's Office reports, acting alone (or at least approaching the sign alone), who "appeared to be in possession of a hammer and a battery powered saw." Because the camera is infrared, the color of the dismantler's clothing can't even be determined. The video watermark clocks the crime at 12:41 a.m., but it's unclear if that's even accurate, as the camera's date stamp is waaay off.

The criminal investigation continues, as does the dispute over who owns the property that the signs sit on. Meanwhile, the billboard butcher's razing has left the community far more divided ("Our views!" vs. "Our businesses!") than previous incarnations of high-profile vandalism.

From a press release:

On Monday January 20, 2014 (9:17 AM), a Sheriff’s Deputy began an investigation of vandalism to a billboard. The billboard had been completely cut down, west side of US 101, 200 yards north of the Bayside Cutoff, Arcata. The billboard in question belongs to CBS Outdoor (Berkley California based) and was valued at $20,000 by the local company managing the sign, All Points Signs. The All Points Signs representative had installed “trail cams” due to recent other vandalisms of this nature. The trail cams were checked and found to depict a solo male suspect who appeared to be in possession of a hammer and battery powered saw. The suspect appears to be a male. Since the cam was in infrared mode at the time of the photos, it is difficult to determine the color of the clothing. The subject was wearing a hoodie style jacket, pants, light weight hiking boots, backpack and no gloves.

Anyone who might have information is encouraged to call the Humboldt County Sheriff’s Office with the information 707-445-7251.