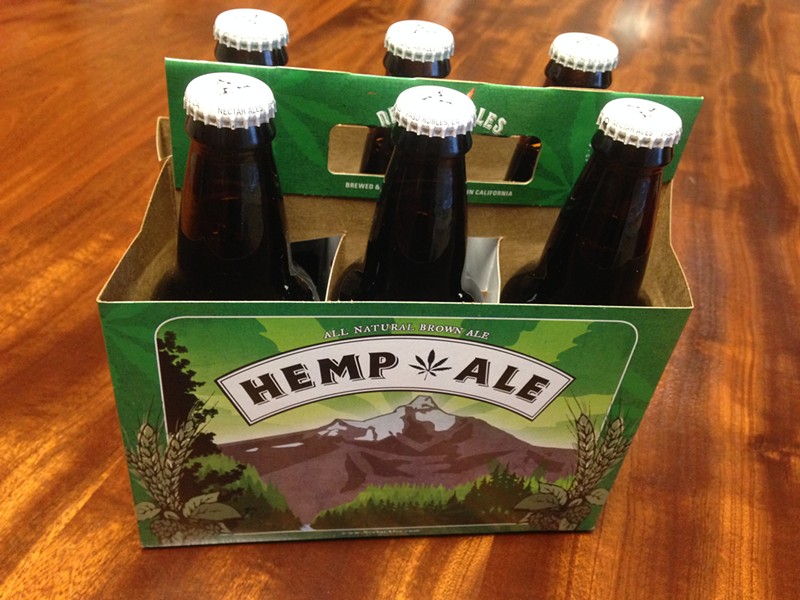 The folks at Humboldt Made are hoping a labeling controversy might land a once-local beer’s brewing operations back on the North Coast.

The Humboldt Brewing Co.’s current incarnation has little to do with its county of origin. Sure, there are the colorful labels complete with images of towering redwoods and lush ferns. There’s the word “Humboldt” splashed across every bottle and six pack. There’s even the “Humboldt, CA” that pops up next to the company name after a quick Google search. But, the fact is, the beer isn’t brewed in Humboldt County, and hasn’t been for more than a decade. You can’t even buy any of Humboldt Brewing Co.’s five beers at most local stores  (the new BevMo in Eureka is the only place in the county that carries any of them).

The situation was enough to draw the ire of Humboldt Made, which — after looking into a variety of potential legal actions only to find Humboldt Brewing Co. isn’t afoul of any laws — is writing a polite letter asking the company to move its brewing operations to a locale that would better represent its namesake.

In 2012, Firestone Walker was reportedly wanting to refocus its efforts into its own line of brews and sold Nectar Ales — which was producing about 10,000 barels a year — to Total Beverage Solutions, a beer and wine distributing heavyweight based in North Carolina. In November of last year, Total Beverage Solutions announced that it was dumping the Nectar Ales label and reverting back to the original Humboldt Brewing Co. name.

The rebranding was aimed at better showcasing “the spirit of the brand,” Total Beverage Solutions VP of Sales and Marketing Tom Rose said in a press release announcing the change, adding that the beer recipes would remain the same in spite of the makeover.

And just what is the “spirit” of Humboldt? Let’s see how its summed up on the brewing company’s website:

“Geographically, Humboldt County is located on the northern coast of California. Yet tucked away amongst the ancient towering redwoods and along the vast rocky Californian coast exists a way of life as independent as it is beautiful. It’s a place where ‘live and let live’ are the laws of the land and ‘going green’ has had a different meaning for generations. The idea of preservation and living in unison with one’s surroundings is not some fad but ingrained in the soul of the community. At peace in its own world, Humboldt County does not adhere to corporate memos, to-do lists or stuffy suits. The only thing on today’s agenda is to live life and drink good beer.”


Well, some in Humboldt also don’t adhere to what they see as out-of-towners capitalizing on the Humboldt name. Angie Schwab, executive director of the nonprofit Humboldt Made, said the Humboldt Brewing Co. situation was brought to her attention recently and doesn’t sit well with her.

“It upsets me to see the word ‘Humboldt’ on their website,” Schwab said.

Humboldt Made looked into trademark and consumer confusion laws to see if it could force Humboldt Brewing Co. to change its course through litigation, but Schwab said the organization found no legal recourse. Instead, she said, she’ll be penning a polite letter asking Total Beverage Solutions to relocate Humboldt Brewing Co. operations back to Humboldt.

Not everyone sees things the same way as Schwab, however. Barbara Groom, who owns Eureka’s Lost Coast Brewery, said she doesn’t think its fair to say the company is using the “Humboldt” name to sell beer. Total Beverage Solutions, she said, is probably just interested in buying struggling brands (like Nectar Ales) at a cheap price and then using their extensive existing distribution network to try to beef up sales.

“They have done it with other brands that have lost sales because of neglect,” Groom said in an e-mail.

But that still doesn’t change the interesting timing of the Nectar Ales name change. In an interview with the website BeerPulse after the 2012 purchase, Total Beverage Solutions CEO Dave Pardus said that while Nectar Ales, now Humboldt Brewing Co., was largely a west coast brand, Total Beverage Solutions intended to begin distributing it on the east coast “in a year or so.”

One of Humboldt Brewing Co.’s more popular offerings is Hemp Ale. When slinging Hemp Ale from a virtually unknown brewery on the east coast, one can imagine a company having a bit better luck with the word “Humboldt” on the label.

Total Beverage Solutions media contact Courtney Gibson did not immediately return a call seeking comment for this story. If she gets back to the Journal, we’ll update this story.

While Schwab remains hopeful her letter might bring Humboldt Brewing Co.’s production back to the north coast, she pointed to the issue — and the instance of a foreign clothing company marketing sweatshirts with “Humboldt” scrawled on them — as signs that Humboldt’s name recognition is doing well.

“If nothing comes out of this and we can’t create a productive solution, then we have to be happy that we’re making some progress on a national an international level, that people see value in products that are made here in Humboldt County,” she said.