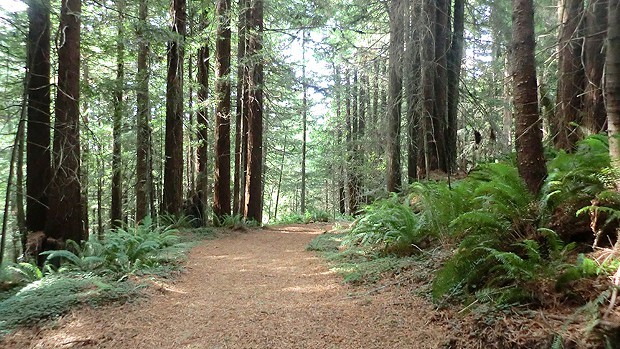 It seems the Humboldt County Planning Commission has kicked a hornets’ nest. Or, maybe it was just Third District Supervisor Mark Lovelace.

During its sixth meeting to take up the Conservation and Open Space element of the General Plan Update — recently dumped back into its lap by the Board of Supervisors — the commission voted 4-2 on Feb. 18 to eliminate language from the element supporting the creation of a countywide trail system. Despite a general community fatigue on the GPU caused by a seemingly endless decades-long process, the vote immediately raised hackle and brought forth a flurry of accusations at the commission’s meeting two days later. The flurry seems to have begun with a call to arms from a certain supervisor.

“Stop what you’re doing right now and watch in horror while the Planning Commission eliminates trails and open space from the General Plan Update,” Lovelace, who was on the short end of a 3-2 vote to send the element back to the Planning Commission in the first place, wrote on his Facebook page during the Feb. 18 meeting. “This is what’s happening, and it’s truly appalling.” Lovelace followed the post minutes later with another urging trail advocates to get down to Supervisors Chambers “NOW” to address the commission.

The response to Lovelace’s call wasn’t immediate, but a host of trails advocates did descend on Supervisors Chambers for the commission’s Feb. 20 meeting, and let their frustrations be known. Bayside resident John Olson got things started saying he was disturbed by what he’d seen a couple of nights earlier, saying the commission seems to be enacting a “unilateral inversion of the values system that was created by a previous public process.”

But it also became quickly apparent at the meeting that some commissioners have frustrations of their own. Lee Ulansey, voted to the commission by the board last March, blasted Lovelace for mischaracterizing the commission’s action — pointing out (correctly) that the commission simply voted to remove language from the element supporting the goal of a county-wide trail system, but did nothing to “eliminate trails and open space” from the entire plan, as Lovelace charged.

Ulansey also took issue with Lovelace’s commentary on the commission’s actions in general, saying it was an attempt “push us around and force our decisions into a mold” consistent with Lovelace’s ideology and wishes.

In a curious twist, Ulansey then accused Lovelace of being “totally biased and blind” to the needs of disabled people. Ulansey explained that he objected to the use of the word “no motorized” in the element’s stated goal supporting “a countywide trail system that meets future recreational and non-motorized transportation demands,” feeling that it discriminates against disabled people who need all-terrain vehicles to access trails and recreational areas. The commissioner urged all “able-bodied trail advocates” to think long and hard about the effects of such “restrictive language” on “those who are less fortunate.”

Susan Masten, appointed to the commission in 2011 by Fifth District Supervisor Ryan Sundberg, then said she wished Ulansey would have come forward with some of his concerns about disabled access when they discussed the issue a couple of days earlier.

Masten also said she left the Feb. 18 meeting feeling “disturbed” at some of Ulansey’s comments she felt were disparaging to prior work done by the commission. The commissioner went on to say she questions the motives and agenda of some of her cohorts, who she feels are not giving “due consideration” to the scores of people that turned out to provide input earlier in the General Plan Update process and are instead making decisions based on the comments of a select few. “I will continue to encourage the public to attend these meetings, because you need to be here,” Masten said.

Meanwhile, the board is set to consider appropriating nearly $20,000 — $12,625 in General Fund Contingencies and $6,500 in overtime expenses — to pay for a total of 17 special Planning Commission meetings — including the two last week — to take up the GPU elements.

To view the agenda for Tuesday’s board meeting, visit here. Full video of the Feb. 18 and 20 Planning Commission meetings can be viewed here, though the Lost Coast Outpost’s Ryan Burns offers rundowns of the meetings here and here, complete with some select video clips.