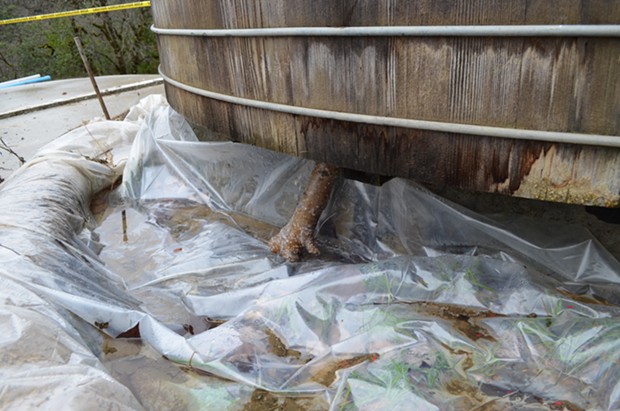 Water tank construction will continue in Alderpoint after a judge today denied an injunction against the state’s payments for the project.

Eureka-based contractor Mercer-Fraser is suing the Alderpoint Water District over its bidding process from last year. The company said the lowest bidder was unfairly awarded the project. Read about the lawsuit in this week’s cover story, available online here.

Reached by phone following oral arguments, Alderpoint Water District’s attorney Clare Gibson said she was “very pleased” with today’s ruling, which she said showed the district’s need for a safe water supply outweighed any alleged problems with the contract.

In a detailed ruling adopted today, Sacramento Superior Court Judge Allen Sumner outlined his reasons for denying the injunction, saying that the potential harms to the environment and customers served by the water district outweighed potential harm to taxpayers from an unfair bidding process.

“If work stops, the District’s customers will continue receiving unsafe drinking water and the aging redwood tanks will continue leaking thousands of gallons of water per day during the worst drought in California’s history,” Sumner wrote. “Additionally, stopping work would jeopardize the District’s ability to complete the project on its limited budget. The court finds these compelling reasons not to grant the injunction.”

While he wasn't ruling on the lawsuit itself, Sumner also wrote that “Mercer-Fraser is not reasonably likely to establish Cal Electro’s bid was non-responsive, much less that any non-responsiveness was consequential,” suggesting that the suing contractor is not likely to prevail in its lawsuit against the water district. Read the tentative ruling (which was adopted today) here.
The attorney representing Mercer-Fraser did not immediately return a phone call.