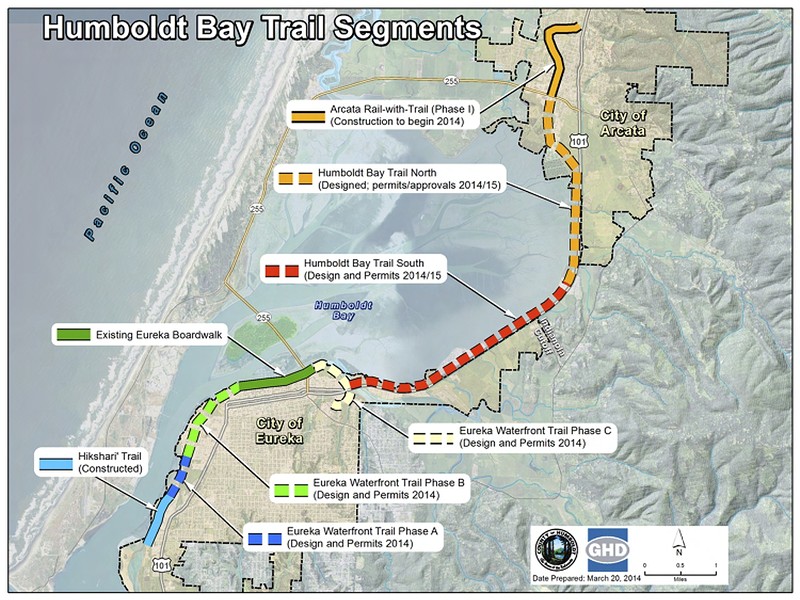 Dreams of a Humboldt Bay Trail connecting Eureka and Arcata got a major boost Tuesday, when the California Transportation Commission voted to allocate $2 million to the county for engineering design and environmental permitting for the trail’s southern portion.

Humboldt County Deputy Public Works Director Hank Seemann said the funding is expected to come online in July, and represents a major step forward. “The momentum is really building,” said Seemann, who will be presenting an update on the project to Humboldt County Association of Governments March 27.

In addition to the funding allocation, Seemann said his department is preparing to release a feasibility study analyzing where to place the trail from Target to Bracut early next month. Additionally, Seemann said the county will soon release a narrative document that defines the need and purpose of the project.

“I would say there’s been a lot of really important developments in terms of agencies coordinating and in terms of having good technical information,” he said.

While there’s clearly a momentum building, Seemann said, the project still has a long path ahead, noting that planners still haven’t settled on an alignment for the trail.

“How will it snake through between highway and wetland, railroad tracks, eucalyptus trees, drainage ditches and private property?” he said. “Plus, we’ve got to get across the Eureka slough. The feasibility study breaks those questions down into logical segments and then looks at the costs and the resource impacts.”

Cautioning that it’s way too early to estimate total build-out costs, Seemann guessed the total project could run in the range of $8 million to $12 million. “There are definitely hurdles or challenges to work through,” Seemann continued. “In some ways, the stars have aligned and everyone’s rowing in the same direction, but we still need to get there. But, we all know where we want to get.”

See the full press release from the county below:

On March 20, 2014, the California Transportation Commission approved allocation of $2 million to Humboldt County to perform engineering design and environmental permitting for the southern portion of the Humboldt Bay Trail. The Bay Trail South segment extends from X Street in Eureka north to Bracut for a total length of 3.8 miles.

The Humboldt Bay Trail is a proposed Class I bikeway situated within the U.S. Highway 101 and railroad transportation corridors between the cities of Eureka and Arcata, along the east shoreline of Humboldt Bay. A Class I bikeway is a paved, two-directional trail separated from any street or highway. In addition to bicycle use, the trail would provide transportation, recreation, and coastal access opportunities for pedestrians, joggers, wheelchair users, skaters, and other non-motorized users.

The Humboldt Bay Trail is being developed as a series of linked projects in coordination with the Humboldt County Association of Governments (HCAOG), County of Humboldt, City of Arcata, City of Eureka, California Department of Transportation (Caltrans), and the North Coast Railroad Authority (NCRA).

Also on March 20, the California Transportation Commission awarded funds for construction of Phase 1 of the Arcata Rail-with-Trail Connectivity Project, which extends from Foster Avenue/Alliance Road to Samoa Boulevard. Construction of the Phase 1 segment is scheduled to begin this year. Phase 2 is proposed to extend from Samoa Boulevard south along the NCRA railroad corridor to Bracut for a total length of 3.0 miles. Phase 2 corresponds to the Bay Trail North segment of the Humboldt Bay Trail. Construction funds have not been secured for the Bay Trail North segment.

The City of Eureka has three phases of the Eureka Waterfront Trail currently in development. Phase A will extend from the existing Hikshari’ Trail to Del Norte Street, and Phase B will extend from Del Norte Street to C Street. Phase C will connect the existing Adorni Trail at Halvorsen Park to the existing Target Trail, then continue under the Highway 101 bridge at Eureka Slough to Tydd Street near Myrtletown. Phase C will connect with the Bay Trail South segment near the Target Trail and Eureka Slough.

Projects are being developed based on the findings and direction of the Humboldt Bay Rail Corridor Committee convened by NCRA in 2012, and in conjunction with the Eureka-Arcata Route 101 Corridor Improvement Project being implemented by Caltrans and HCAOG.

Funds for engineering and environmental permitting of the Bay Trail South segment will be available starting in July 2014. The engineering and permitting phase is expected to require at least two years due to the complexity of the project, proximity to sensitive resources, and constrained right-of-way.

Additional information on the Bay Trail South segment of the Humboldt Bay Trail is provided in the Project Study Report, available on the Humboldt County Public Works web site under Documents:
http://www.co.humboldt.ca.us/pubworks/docs/humboldtbaytrailsouthpsr_3-18-2014.pdf