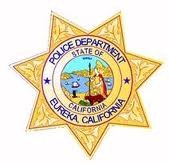 The second of two men shot to death Wednesday evening in a Harris Street home has been identified by the Humboldt County Coroner's Office as 25-year-old Lance Delbert Henry.

Henry and Richard Charles Storre Jr., 60, were both found dead of gunshot wounds to the head by Eureka police at about 6 p.m. Wednesday. Police took Vincent Earnest Sanchez, 29, and Henry's half-brother, into custody at he scene and he was later booked into jail on suspicion of murdering both men.

The Times-Standard is reporting that Henry and Sanchez were both staying at Storre's residence.

The suspect arrested after a double homicide in Eureka on Wednesday evening has a criminal history that includes one case that captured local headlines a few years back.

According to court records, Vincent Earnest Sanchez, 29,  was arrested for separate DUI offenses in 2007 and 2008 and later convicted of both. In 2009, he broke into the Ingomar Club armed with a long sword and a hatchet and was alleged to have caused more than $10,000 in damage before officers arrested him with the help of a police dog. The Times-Standard covered the arrest at the time.

Sanchez was charged with second-degree burglary, resisting arrest and vandalism in the case, though the latter two charges were later dismissed as a part of a plea deal that saw him sentenced to serve 288 days in county jail and three years probation. Last year, Sanchez was again arrested for felony vandalism, but the charge was reduced to a misdemeanor in a plea agreement that saw him sentenced to three years probation.

A Eureka man was arrested this morning on suspicion of double murder after police found two men dead of gunshot wounds to the head at a residence on the 2100 block of Harris Street on Wednesday evening.

Police detained Vincent Earnest Sanchez, 29, at the scene for questioning and later arrested him on suspicion of two counts of murder based on evidence collected at the scene. Sanchez is considered the lone suspect in the case, according to police. 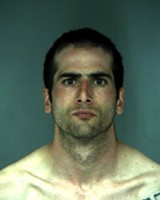 Humboldt County Coroner Dave Parris identified one of the victims as Richard Charles Storre Jr., 60, of Eureka. Parris said releasing the identification of the second victim might take some time, as he's still working to positively identify the man and notify family members.

As of 9 a.m., detectives remained at the small residence in the upscale Harris Street neighborhood processing the crime scene. The house, which is shielded almost entirely from view from the street by a large hedge, was blocked off with yellow crime scene tape.

Eureka Police Chief Andy Mills said it appears the victims were known to the Sanchez, who Mills said officers found in the yard as they arrived. Mills said there were no signs of forced entry into the residence and there is no known motive for the killings at this time.

Previously:
Eureka police launched a homicide investigation Wednesday evening after finding two dead men in a house on the 2100 block of Harris Street.

According to a press release, officers responded to a report of an injured person at the residence shortly before 6 p.m. but arrived to find the man dead “with obvious signs of trauma. When officers cleared the residence, they found a second body.

The two men have been identified but police are currently withholding their names until their families can be identified.

Eureka Police have made an arrest in the murder of two Eureka men.

On March 26, 2014 at 1757 hours, Eureka Police officers were dispatched to 2109 Harris Street in Eureka on a citizen’s report of an injured person in the house at that location. Officers entered the house to render first aid and found a man deceased with what appeared to be a gunshot wound to the head. Officers checked the rest of the house for other persons who may need help and found a second person deceased as well. He too suffered from a gunshot wound to the head.

Based on evidence collected at the scene investigators believe the crime was a double homicide. One person was detained at the scene and now has been arrested as the lone suspect in the murders. Investigators will continue to process the scene for the rest of today. The deceased have been identified but their names are being withheld until family members have been notified by the Coroner’s Office.

The suspect is Eureka resident: Vincent Earnest Sanchez, DOB: 04-30-1985 who was booked into jail for two counts of homicide.

On March 26, 2014 at 1757 hours, Eureka Police officers were dispatched to 2109 Harris Street in Eureka on a citizen’s report of an injured person in the house at that location. Officers entered the house to render first aid and found a man deceased with obvious signs of trauma. The officers checked the rest of the house for other persons who may need help and found a second person deceased in the home as well.

Detectives and evidence technicians have been called to investigate the deaths and process the scene. Based on information collected at the scene, the crime is being processed as a homicide.

The deceased have been identified but their names are being withheld until family members have been notified.

Anyone with information about this investigation should call the Eureka Police at (707) 441-4044.