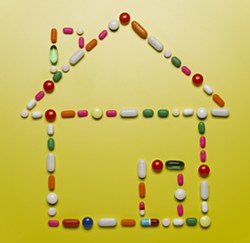 Some McKinleyvillians were shocked last week to discover that Lima's Pharmacy, at 1711 Central Ave., had morphed over the weekend into a CVS pharmacy. One Lima's customer, Darin Price, found out when he called in a prescription renewal and a CVS phone system asked him to punch in his prescription number.

Price immediately fired off an email to the Journal calling it “reprehensible” of Lima’s to sell his medical information to a national chain without his permission. He surmised this might even be a violation of HIPAA, the Health Insurance Portability and Accountability Act.

"No warning whatsoever, no letter, nothing saying that they were selling my information," Price said later over the phone.

Price filed a complaint with the state Department of Health & Human Services, Office for Civil Rights. And he says a manager at CVS told him his information was now in the company's national database "and there was no way it could be removed."

Ramona Lima, co-owner of the pharmacy with her husband, Bob, said this week over the phone from their Eureka branch — which is not being sold — that they actually began notifying patients of the sale in February.

"We posted a letter at the counter, and we asked all of our patients to read it when they came to pick up their prescriptions," she said.

They also gave individual letters to patients who had their prescriptions delivered. And they notified doctors. In the week before the changeover, Limas called every person who had a prescription ready to come get it in order to avoid possible delays later; within two days all 450 prescriptions were picked up. A few people, she allowed, still would have missed the notice if they hadn't come in that month or had anything delivered. She'd only heard a couple of complaints, she said.

But it was not wrong for Lima's to sell its patients' medical information to the purchasing pharmacy, according to Joyia Emard, a public information officer with the California Department of Consumer Affairs's Board of Pharmacy.

"When a pharmacy is sold, the records go with the practice," she said.

Emard said a pharmacy is not legally required to notify patients of an ownership change. But state law does require the purchasing pharmacy to keep the old pharmacy's patient information for three years, she said.

"Because if we do inspections, they are now the record-holder for that old pharmacy," she said.

So it's true Price can't remove his information from CVS's database yet, but after three years he can. And he can transfer a duplicate of his information now to a new pharmacy (which Price said he has done).

Lima's sale of Price's (and others') medical information isn't a privacy violation. "His records are still in the realm of pharmacy," said Emard.

At the new CVS in McKinleyville, in fact, Lima's head pharmacist, Chris Beeman, and many of the other Lima's employees are still there. Ramona Lima said CVS, which courted them, agreed that was best. Employees were allowed to keep their seniority, as well — a 10-year Lima's employee is now a 10-year CVS employee, for example. Everyone except for one temporary employee was offered a position with CVS, Lima said. One employee chose to work at the Eureka Lima's instead, she added, and another decided to opt out of pharmacy work altogether.

Lima said deciding to sell the McKinleyville branch was not easy. But, she said, she and her husband knew that CVS was planning to move into town and was eyeing the building across the street where Figueiredo's Video Movies and Paul's Live From New York Pizza are housed. The Limas bought their pharmacies 17 years ago from Clay Pharmacy, and for 15 years the McKinleyville branch hasn't had any competition. Now there's a Rite Aid in town, and here was CVS coming in. Lima said reimbursement rates from insurance companies have declined and independent pharmacies aren't getting the best prices from their drug wholesalers, so it made sense to them to downsize the business.

"With CVS coming in right across the street, we were concerned about the viability of keeping our employees with jobs," Lima said. "If we lost business, we'd have to start firing people."

For now, said Lima, CVS is renting the shop at 1711 Central Avenue from her and her husband (they only sold the business). She said, last she heard, CVS still plans to set up shop across the street someday. The rumor is they'll tear down the existing structure and build a new one. The Journal is waiting to hear back from CVS and Paul's Live From New York about those possible plans. Dana Figueiredo, co-owner of the video store, said this week that she has no comment at this time.

But here's a bright note for those who favor indies over chains: Cloney's, the independent pharmacy with two branches in Eureka, is opening a third branch — up in McKinleyville, in the Safeway shopping center at 1567 City Center Road. (This was news to the Limas; Ramona Lima said she and her husband didn't know Cloney's was coming to McKinleyville when they made their decision to sell to CVS.)

Backus said Cloney's plans to expand its delivery service, based out of Eureka, this month to McKinleyville, Trinidad, Blue Lake, Arcata and Fieldbrook. The McKinleyville branch will open in late June or early July.

"We haven't had a new retail location since the early 1960s," said Backus. "Over the past 20 years, there has been somewhat of a pharmacist shortage nationwide, and so the possibility of expansion has been almost impossible. However, there have been a number of pharmacy schools that opened since the early 2000s, and now pharmacy grads are starting to flood the market, so it's not as difficult to find help like in years past."

Like other pharmacies, and doctors, Cloney's also faces the challenge of low insurance reimbursement rates, which Backus calls "absolutely horrendous." As well, he said, chains have been acquiring the very insurance companies that process the claims they're billing for prescriptions.

"There are many, many cases where the insurance company (or Pharmacy Benefits Manager, PBM) will require a patient to pay a copay at an independent pharmacy, but no copay at the chain pharmacy that happens to own the PBM," Backus said. "So for the independent pharmacy, it's a constant everyday struggle against the PBMs to be treated somewhat fairly. "

Backus said there was a 20-year period, starting in the 1980s, when independent pharmacies were closing and being replaced by chains. But in recent years, he said, that trend has begun to reverse. (Emard, from the state board of pharmacy, said in the last three years five independent pharmacies in California have been purchased by chains.)
Despite the challenges, plus 60- to 80-hour work weeks, Backus is charged up about his company's expansion.

"I think we will do well if our only other competition in town are national chain pharmacies," he said.

He notes that Cloney's will offer delivery service, health care classes, blister packaging, complaince packaging for those who need help keeping track of their multiple medications, immunizations and will continue its 24/7 service to Hospice patients. Cloney's also plans to develop a local compounding service, something only Lima's does currently. The new Cloney's also will sell gifts and photo services and such.

Backus joined Cloney's as a junior partner in 2010, with the agreement he'd buy out owners Patrick Cloney and Rich Spini in 2015. He praised his co-owners for the business they've built up. He's got even bigger plans.

"I come from a family of entrepreneurs and have always had the dream of running my own business," Backus said. "... I hope to expand the business to at least six or seven pharmacies by the time I'm ready to retire. I want a challenge. Will I change the name of the business to Backus Pharmacies? Perhaps. I think the name and nature of the business has to be a reflection of the owner, and vice versa. Maybe I'm a bit vain for wanting to see my name in lights, but I think having your name and reputation on the line makes you fight even harder when the going gets tough."

Here's the text of the letter Ramona Lima says was posted at the counter of the McKinleyville Lima's notifying patients of the pending sale:

TO ALL OUR VALUED PATIENTS:

FOR THE PAST 16 YEARS, LIMA’S PHARMACY IN MCKINLEYVILLE HAS HAD THE PLEASURE TO SERVICE

THIS COMMUNITY BY PROVIDING THE MOST EXCELLENT PRESCRIPTION AND PHARMACY SERVICES.

TO BUILD A LOCATION IN MCKINLEYVILLE ON CENTRAL AVENUE WITH PLANS TO OPEN LATER THIS YEAR.

DUE TO THE CHANGING CONDITIONS OF THE PHARMACY INDUSTRY, LIMA’S PHARMACY IN

MCKINLEYVILLE HAS AGREED TO SELL THE PRESCRIPTION FILES TO CVS. IT IS OUR HOPE TO CREATE A

“MERGING” IF YOU WILL, WITH CVS AS THE EMPLOYEE FACES THAT YOU SEE WILL BE THE SAME, BUT

THE NAME AND LOOK WILL BE DIFFERENT.

THIS WAS AN EXTREMELY DIFFICULT DECISION FOR US TO MAKE. WE HOPE YOU WILL UNDERSTAND

WE ARE GRATEFUL TO YOU, OUR PATIENTS IN OUR COMMUNITY FOR YOUR MANY YEARS OF LOYALTY

AND PATRONAGE OF OUR MCKINLEYVILLE BRANCH. WE MUST ALSO GIVE TO CREDIT OUR EMPLOYEES.

THE SUCCESS AND BUILT THE REPUTATION WE HAVE TODAY. WE ARE FOREVER GRATEFUL.

THROUGH ITS MANY YOUTH AND CIVIC ORGANIZATIONS AND PROGRAMS AS WE ALWAYS HAVE.

EFFECTIVE APRIL 1, 2014, YOU WILL NO LONGER BE ABLE TO CHARGE YOUR MEDICATIONS ON THIS

ACCOUNT. PLEASE CONTINUE TO SUBMIT YOUR PAYMENTS TO THE EUREKA OFFICE UNTIL PAID IN

WITH SINCERE AND HEARTFELT GRATITUDE