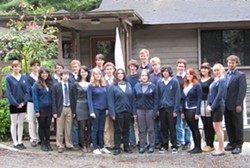 Wow, those are some smart whippersnappers.

The Washington Post just ranked Arcata’s Northcoast Preparatory and Performing Arts Academy as the 21st most challenging high school in the country. To compile the rankings, the Post computed an index score using the number of college-level tests given at the school divided by its number of graduates that year, the percentages of students who qualify for free or reduced lunch and the percentage of graduates who passed at least one college-level test during their high school career.

It turns out, 95 percent of Northcoast Prep’s graduates passed at least one college-level test during their career and about 43 percent qualify for lunch subsidies. This is the fifth year in a row the 136-student school has landed on the Post’s list, having finished 24th last year, 21st in 2012 and 2010 and 13th in 2011. This year’s index score of 9.952 is the highest the school has ever earned from the Post.