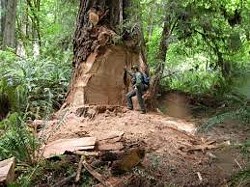 The New York Times has a piece this week on the despicable business of illegally sawing big hunky burl chunks off of our massive redwood trees — our elders, as the Times elegantly notes — and selling them for profit on an apparently quite healthy global market. Says the story:

"The poachers, known locally as the 'midnight burlers,' are motivated by a sluggish local economy and expensive methamphetamine habits, park officials say, and they have been targeting ever-bigger burls and using increasingly brazen tactics."

The story says there were 18 known cases of poaching last year in Redwood National and State Parks, including that of a 400-year-old tree — the first time a whole tree was cut down, that they know of, for burl. Much older trees have been hacked away at, and the slicing into their flesh to remove pretty burl can weaken them.

Some of the massive burls thieves go for harbor a complexity of forest life, including salamanders, high in the canopy. The story quotes folks comparing the burl thefts to "hacking up a church" and "killing elephants for ivory," but it also quotes a young Orick fellow in a sighing way as saying burl thieving is "a sad way to earn a living, but there is no industry here."