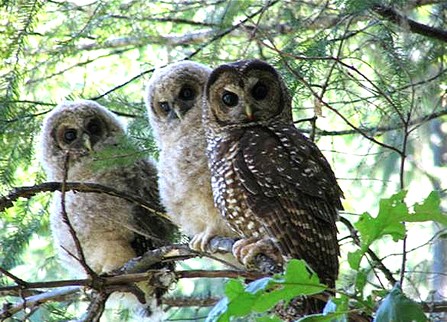 Twenty years after the Northwest Forest Plan’s birth, lawyer/writer Daniel Jack Chasan looks at whether the plan has done all it was cracked up to do. Did it save Northern Spotted owls? Did it protect the logging industry from utter devastation?

Chasan concludes, in part one of his story at Crosscut.com, that “[n]either the owl nor the forest products industry has done as well as some people had expected and many had hoped.”

But the owls aren’t all dead, and the timber industry didn’t conk out.

And the owl? Chasan notes that a 2004 review by the Bush administration found that “owl populations had dropped faster than anyone had anticipated.”

“It pointed the finger at past habitat loss on federal land, and ongoing loss of habitat outside the area covered by the Northwest Forest Plan," he continues. "It also pointed to the invasion of non-native barred owls, which have been pushing spotted owls out of their habitat.”

The Northwest Forest Plan was a “political compromise” allowing “more logging than the scientists preferred," Chasan says, It was devised by the Clinton administration after the 1990 federal listing of the Northern Spotted owl as threatened triggered a court-ordered cessation in 1991 of “all timber sales in spotted owl habitat, which included nearly all Northwestern national forests.”

“In some people's eyes, we had reached Owlmageddon,” writes Chasan.

The Record of Decision establishing the Northwest Forest Plan was published April 13, 1994. The plan covers 24 million acres of federal land in northern California, Oregon and Washington, 30 percent of which is set aside for what’s called late successional reserves where old-growth is supposed to be protected and enhanced. Ten percent of the total acreage is set aside for protection riparian resources (lands near water). A surrounding matrix of 4 million acres, which critics say contains old-growth trees, too, is for multiple uses including timber harvest.

Part two of the series continues the tale.