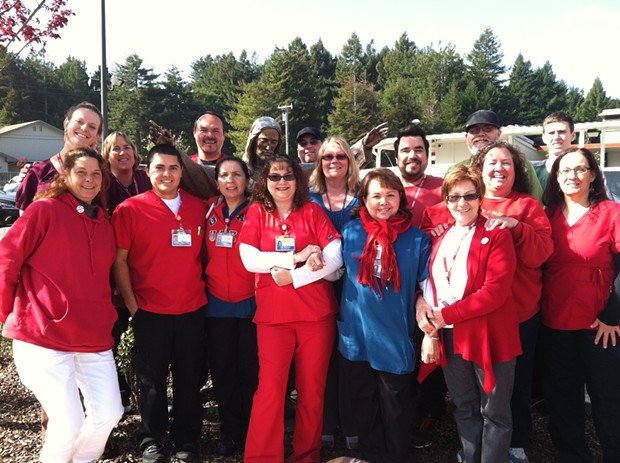 Service workers at St. Joseph Hospital in Eureka have voted 149 to 74 to join the National Union of Healthcare Workers (NUHW), with 223 of the 227 eligible bargaining unit members voting. The ballots were counted Friday, April 18.

Shortly after the vote was announced, St. Joseph Hospital-Humboldt President David O’Brien issued a statement to staff and board members vowing to honor the employees' voice "and prepare to enter into good faith collective bargaining with the NUHW ..."

"With the vote behind us, it’s time to move forward … together," O'Brien said. "Yes, there were differences of opinion and strongly held views. That is to be expected. So it is especially important to remember and keep our focus on what unites us, and that is our deeply held commitment to provide safe, quality care and compassion to our patients and their families."

It was indeed not an easy battle, according to those on the service workers' side. The unionizing effort began in May 2013. One of the organizers, Kerry Sweeney, a labor and delivery nurse at the hospital for 12 years, said the effort was propelled by concerns similar to those of St. Joseph nurses. During informational picketing last year, some of the hospital’s 350 nurses, represented by the California Nurses Association, complained about staff reductions, especially among nurses’ aides and other positions that nurses rely on for help. The hospital’s chief nursing officer, Carol Reeder, countered at the time that the hospital would never compromise patients’ safety.

The CNA is affiliated with the NUHW.

Sweeney said another concern is service workers not having received a raise in four years — until they got one last year, which Sweeney said she suspects came in response to the union effort.

The hospital administration, while posting union-effort informational literature around the hospital as required by the National Labor Relations Board, was opposed to it. Some managers wore “Vote No” shirts and put up flyers countering union claims. The hospital also started a web page called SJE Just Facts in January, after the labor board notified it there would be an election. The site has provided neutral information on the election process, as well as plenty of arguments against going union. Under “Facts about NUHW strikes,” for instance, the hospital’s website notes that NUHW-represented workers in California went on an average of 12 strikes in just two years, averaging “one strike every two months.”

Sweeney said the nurses, who unionized in 2001, have had four contracts in 12 years and not a single strike. The hospital has countered that that’s the CNA … not the NUHW, which in a flyer addressed to employees the hospital indicated has numerous problems including debt and “a poor record of negotiating contracts.”

Both sides have called each other's informational materials misleading or even false at times.

On Monday, Linda Cook, the hospital's vice president of Human Resources, responded to some of the arguments given by the union organizers as reasons for service workers to unionize. She said the hospital employs many nursing assistants in its medical-surgical and progressive care areas "to make sure, whenever possible, that our caregivers are not overworked." Sometimes, she said, a nursing assistant might be reassigned to sit by a patient who's confused or suicidal, and that sometimes there isn't another nursing assistant available to fill in elsewhere for that "sitter." Cook also said last year's wage increase "had nothing to do with the organizing efforts by NUHW, but was the result of the hospital ending fiscal year 2013 with a positive margin for the first time in years." She added that it had actually been less than three years since the previous raise.

Next, the labor board has to certify the election results. That takes about a week.