The National Oceanic and Atmospheric Administration has located the sunken wreckage of the City of Chester, a passenger steamer that’s lain underwater near the Golden Gate Bridge for 126 years.

“The 202-foot long steamship City of Chester had just left San Francisco and was headed up the California coast to Eureka with 90 passengers on Aug. 22, 1888, when around 10 a.m. it was struck by the steamer Oceanic,” says a NOAA news release. “Impaled on Oceanic, which was arriving from Asia, City of Chester remained afloat for six minutes before sinking. Sixteen people died in the accident.”

The 16 dead were all from the Chester: three crew members and 13 passengers, one of whom was Eureka resident Mrs. C. H. Haney, a widow traveling with her relative J.J. Loggie, according to a report at the time in the Daily Alta California. The 440-foot Oceanic suffered minimal damage and no losses. The disaster was the second worst in the bay.

Initial news reports were tinged by the prevalent racism of the time against Chinese people. The Daily Alta California reported that survivors from the City of Chester witnessed confusion and panic among the Oceanic’s 1,105 passengers, mostly Chinese, but also “apathy.”

“…the Chinese crew of the Oceanic showed little energy in saving life,” said the newspaper. “Had they been white sailors, instead of coolies, all on the Chester might have been saved.”

The investigation, in which many survivors, including both ship’s captains, were questioned, revealed that in fact the Oceanic’s crew behaved heroically during the disaster, including one man who leaped into the bitter-cold bay to save a little boy. Criticism turned to praise, then, says NOAA's account of the wreck and its aftermath.

The collision happened in heavy fog. And while initial reports, again, assumed the Oceanic was at fault, the investigation revealed that both captains had made misjudgments. You can read reports of the investigation collected at the website Encyclopedia Titanica, and a full accounting of the court case in the 1894 Federal Reporter, Vol. 61.

Using sonar, NOAA’s Office of Coast Survey Navigational Response Team detected the Chester “sitting upright, shrouded in mud, 216 feet deep at the edge of a small undersea shoal. High-resolution sonar imagery clearly defined the hull, rising some 18 feet from the seabed, and the fatal gash on the vessel’s port side.” 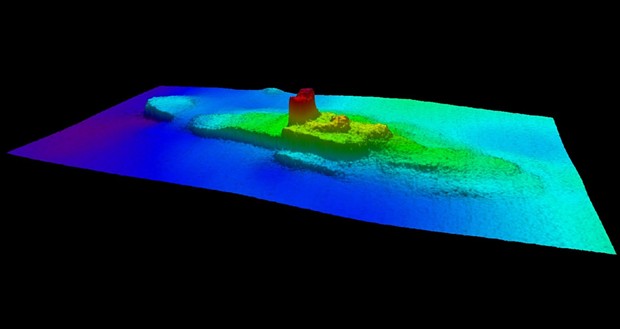