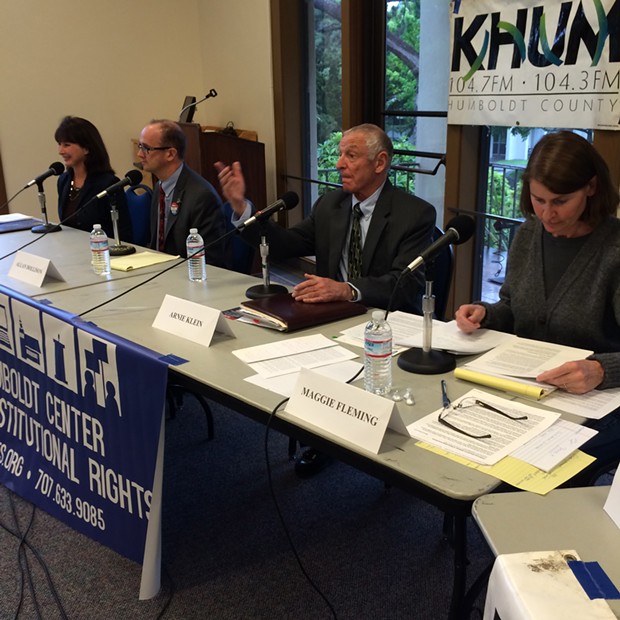 Humboldt County’s field of district attorney candidates sat down last night for what was their 12th debate in the race and, boy, things escalated quickly. The gloves came off, the nails came out and the fur flew.

Held at Humboldt State University and put on by the nonprofit Humboldt Center for Constitutional Rights, the forum saw the candidates field questions from a panel of local media focused on the topics of Constitutional law, free speech rights and public access. (Full disclosure: this reporter was one of the panelists.) But there was often a noticeable disconnect between the focus of panelists’ questions and that of candidates’ responses, as the DA hopefuls often spent large portions of their two-minute responses attacking each other, questioning their foes’ ethics, experience, honesty and qualifications. There were allegations and counter allegations, with a few allegations of false accusations sprinkled in.

Folks who like their politics to resemble cage matches will likely enjoy the spectacle, which is now preserved on the website of the event's cosponsor, KHUM. And for those who prefer a more civilized, issues-focused discussion, there are plenty of enlightening tidbits to be found between barbs.

But if candidates trading insults with opponents awkwardly sitting just a few feet away is too much for your sensibilities, you can find the Journal’s past coverage of the race here.

The candidates — Allan Dollison, Elan Firpo, Maggie Fleming and Arnie Klein — are slated to square off one more time before Election Day, with a debate scheduled for May 28 in Rio Dell.