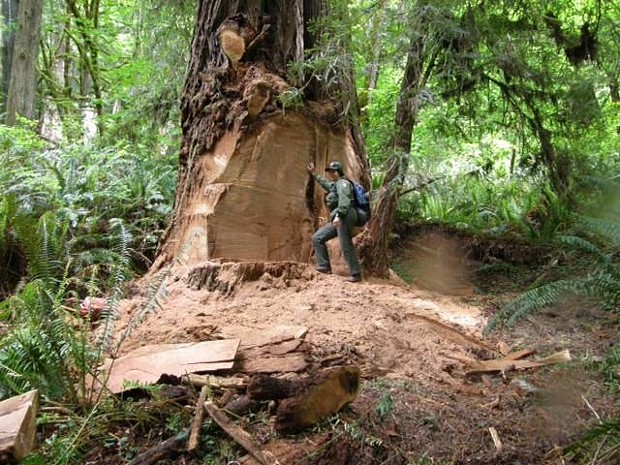 An Orick man was arrested recently on suspicion of hacking burl out of redwood trees on public land a year ago and selling them to a nearby burl souvenir shop.

An anonymous tip led rangers to a shop in Del Norte County, according to a press release, where they discovered burls that matched those carved out of the tree. Rangers determined that Garcia sold the burls to the shop, which is “not currently under investigation in this matter,” according to the release.

Burl poaching has been a problem for some time, leading the park service to close traffic through the park at night and garnering attention from the New York Times.

National Park Service and California State Parks Law Enforcement Park Rangers and Investigators working cooperatively have concluded a year-long investigation leading to the arrest and charges of felony Grand Theft (CA PC 487(a)), Vandalism (CA PC 594(a)), and Receiving Stolen Property (CA PC 496(a)) against Danny E. Garcia of Orick, California for the poaching of old growth redwood burls from the park. Charges are pending against another individual who is currently serving time for unassociated charges.

On April 19, 2013, a researcher in the park discovered cuts on an old growth redwood tree within Redwood National and State Parks (RNSP) in the Redwood Creek drainage. Park rangers responded and discovered a 10-foot diameter, old-growth redwood tree that had been badly damaged by the removal of several large burls. The burls cut from the tree were massive, the largest cut measuring approximately 8.3 feet at the base, 8.2 feet in height, and 1.7 feet deep (approximately 115 cubic feet).

An anonymous tip led to the discovery of the burls at a local shop. Park Rangers matched the size and shape of the cut burls in the shop with those taken from the old-growth redwood tree at the poaching site. Investigation by NPS Law Enforcement Rangers indicated that Garcia had been in possession of the burls taken from the site, and then sold them to the shop in Del Norte County. The burl shop is not currently under investigation in this matter.

The case is being prosecuted in California District Court in Eureka, California.

Redwood National and State Parks contains 133,000 acres of federal and state land in Humboldt and Del Norte Counties, California. Nearly 39% of the remaining old-growth redwood forest in the world is found within RNSP. The parks have experienced an increase in the illegal cutting and theft of old-growth coast redwood burls in recent years.

Burl poaching involves the cutting of burls from both live and dead trees, felling of living old-growth redwood trees to access burls from higher up the stem, and the cutting of down logs for ornamental furniture, veneer, and souvenirs. This uncontrolled and illegitimate harvesting of burls directly threatens individual old-growth redwoods, the prime resource of RNSP, a designated World Heritage Site and International Biosphere Reserve, and includes related impacts to the surrounding ecosystem, threatened and endangered species, and the parks’ scenic values.

Park law enforcement rangers are currently conducting several investigations in Humboldt County and Del Norte County regarding theft and damage to redwood trees inside RNSP. Anyone with information regarding the theft of redwood burl or wood from RNSP may call the park’s Law Enforcement Tip Line at 707-465-7353.