Biologist Gets 10 Months for Yurok Grift 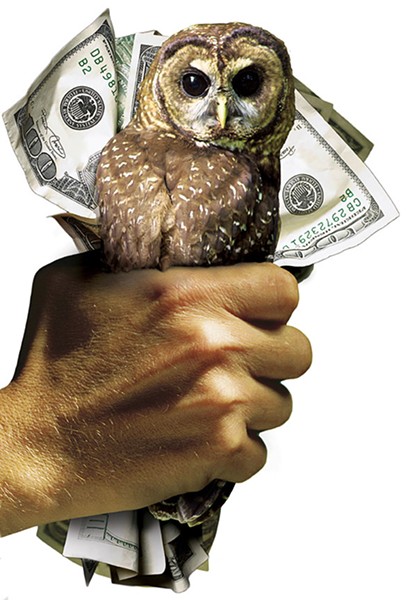 A judge today sentenced a local biologist to serve 10 months in prison for his role in conspiring to embezzle nearly $1 million in federal funds from the Yurok Tribe over a three-year period beginning in 2007, according to Yurok Tribal Chairman Thomas O’Rourke.

Mad River Biologists founder Ron LeValley pleaded guilty in February to a single count of conspiring to embezzle funds from an Indian tribal organization and faced up to two and half years in federal prison in the case. The U.S. Attorney’s Office and the federal probation department felt a one year prison sentence was appropriate in the case, but U.S. District Court Judge William Alsup ultimately opted for the 10-month sentence, citing cooperation with a federal investigation into the grift — cooperation that led directly to the conviction of LeValley’s co-conspirator, former Yurok Tribe Forestry Director Roland Raymond, who was sentenced to a three-year prison term in January.

LeValley’s attorney, William Kimball, argued that his client’s criminal conduct was a blip in an otherwise law-abiding life and that he should be spared a prison confinement.

Reached after the sentencing, O’Rourke said he was very disappointed in the sentence, and the system. “He’s considered a leader in the community, and pillars of the community are held to higher standards,” he said. “In my mind, and in the tribe’s mind, he’s a crook. And, basically, he was slapped on the wrist with the sentence.”

According to court documents, LeValley and Raymond conspired to steal the funds through a complex scheme of fake and inflated invoices and payments for northern spotted owl survey work that Mad River Biologists never performed. In court documents, LeValley claims Raymond told him he was using the ill-gotten funds to pay for tribal forestry and fire crews. LeValley said he thought he was helping the tribe and its members, but concedes he knew what he was doing was, in fact, illegal. Court documents also indicate that none of the stolen funds paid for the work crews and that they were instead spent to support Raymond’s drug and gambling addictions.

As a part of their sentences, both Raymond and LeValley have been ordered to repay the $852,000 they stole from the tribe.

Mad River Biologists submitted more than 75 false invoices between 2007 and 2010, according to court documents. Under the scheme, Raymond would then cut checks from the tribe and LeValley would funnel the money back to him, less 20 percent taken off the top.

The survey work that was never done was primarily looking for habitats for the federally endangered northern spotted owl to determine what tribal properties could be logged without harming owl populations. It’s unclear whether Raymond and LeValley’s conspiracy affected timber harvest plans or led to the destruction of potential owl habitats.

In addition to having founded Mad River Biologists in Arcata, LeValley is an acclaimed wildlife photographer and birder, and was a member of the Marine Life Protection Act science advisory team for the North Coast. He lives in Mendocino County and is due to surrender to authorities in July to begin serving his sentence in a minimum security prison.

In a memorandum urging Alsup to keep his client out of prison, Kimball noted that the court received more than 80 letters in support of LeValley, many lauding his many volunteer endeavors and charitable acts. “These letters tell the story of a man who has consistently put service to others and to his community before himself,” Kimball wrote. “The profound, positive impact that Ron has had, and continues to have, on so many lives should be a powerful mitigating factor as the court weighs the appropriate sentence for his offense.”

O’Rourke said LeValley has never taken full responsibility for his actions, or showed remorse for the damage he’s done to the Yurok Tribe. “He said he was duped, that he was tricked,” the chairman said. “He’s an intelligent man, a business man, and he didn’t get this far in life being tricked … The Yurok Tribe is very disappointed in the sentence, and in the system.”

For more information on the case, see past Journal coverage here, here and here.