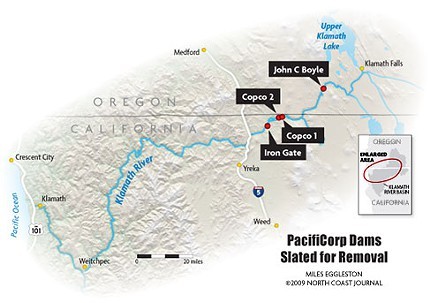 UPDATE: In a statement released today, May 22, Congressman Jared Huffman calls the senators' new Klamath bill "a milestone toward an historic effort to revive California's ailing salmon stocks, improve water quality and build economic resilience" and says it "provides a framework for ending decades of conflict through the biggest dam removal project in the United States and an ambitious restoration and water allocation program."

He also promises this: "[M]y commitment to the Klamath Basin’s stakeholders will remain at the heart of my work on this matter — work that will be bicameral and hopefully bipartisan.”

Legislation introduced May 21 by California and Oregon senators would turn a trio of Klamath Basin restoration and water-use agreements into law — after many, many, many years of hair-tearing and deliberations among a broad array of Klamath river users including tribes, ranchers, fishermen and more.

The Upper Klamath Basin Comprehensive Agreement, the Klamath Basin Restoration Agreement and  Klamath Hydroelectric Settlement Agreement together would settle water rights disputes, balance water uses and authorize removal of four dams on the Klamath, among other things. They need Congressional approval to move forward, and California senators Dianne Feinstein and Barbara Boxer and Oregon senators Ron Wyden and Jeff Merkley have given it that push, according to their join news release.

Now the bill goes to the Senate Energy and Natural Resources Committee.

You can read more about the agreements here and here.

You can read the news release here and below:

The Upper Klamath Basin Agreement was hammered out by a task force appointed last year by Wyden, along with Merkley, Congressman Greg Walden and Governor John Kitzhaber. It was signed on April 18 during a ceremony on the banks of Spring Creek in Klamath County.

The Senate bill gives Congressional approval to the Upper Basin Agreement, authorizing the Department of the Interior to act and achieve the agreement’s benefits: increased stream flows into Upper Klamath Lake, more water certainty to irrigators, improved and protected riparian areas and economic development for the Klamath Tribes and its members. The legislation also authorizes other agreements that comprehensively settle water rights disputes in favor of collaborative solutions to water management in the basin.

“After nine months of hard work by the tribes, ranchers and government officials to craft an agreement that benefits the Upper Klamath Basin and those who rely on it, it is now time for Congress to step up,” Wyden said. “The people of the basin have set aside their differences for the benefit of the region. Congress should follow their example, pass this legislation and put the Klamath Basin on the road to recovery. I want to thank Senator Merkley for his steadfast support and help in crafting the agreement that is basis for this legislation.”

“The stakeholders of the Klamath Basin have chosen cooperation over conflict. In partnership with Senator Wyden, I’ll do all I can to implement the vision and detailed plan they have developed,” said Merkley. “The people in the Basin have done the hard part, now it’s time for the House and Senate to move forward and get this legislation passed. This is essential for both economic prosperity and environmental restoration in the Klamath Basin.”

“California is in the midst of a historic drought, and this bill—in particular the authorization of the Klamath Basin Restoration Agreement and the Klamath Hydroelectric Settlement Agreement—will help Northern California,” Feinstein said. “The three agreements authorized by the bill will improve water supply reliability, environmental recovery and economic growth for a wide range of California stakeholders. These agreements also demonstrate the benefits of different groups coming together in a spirit of compromise and acting on behalf of the greater good.”

“This consensus legislation will implement a carefully crafted plan that will help farmers, fishermen, Native American communities and the environment by restoring the Klamath River Basin,” Boxer said. “I applaud the leadership of Senator Wyden and Senator Merkley and all the stakeholders for coming together behind a deal that will strengthen the region’s economy and the environment.”

"With this legislation, Senator Wyden is honoring his commitment to work with the basin to implement a consensus-based solution to over-allocated water resources. The people of the basin are ready to move forward with the historic agreement between the Klamath Tribes and Upper Basin water users. Now it is up to Congress to take the final steps to rebuild prosperity in the region," said Governor Kitzhaber. "This is the culmination of a decade-long effort to support the vitality of the river and all who depend upon it. I applaud the determination of everyone who has committed to reshaping the future of the Klamath region and thank Senator Wyden and Senator Merkley for their strong leadership in Congress."

Now that the bill has been introduced, it will be referred to the Senate Energy and Natural Resources Committee of which Wyden is a member.