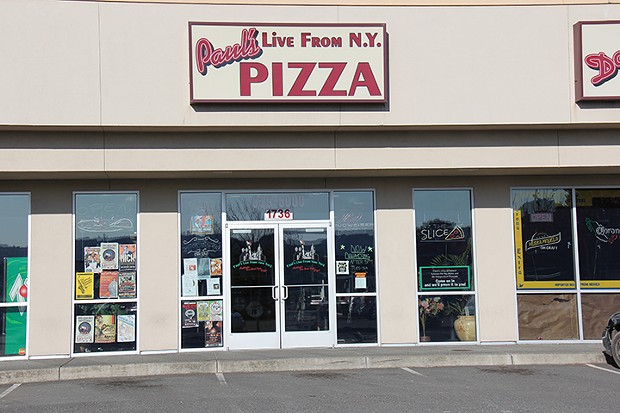 Well, hell. Now there will be no more reason to detour off the highway, en route from Patrick’s Point to Eureka, for a pint and slice at Paul’s Live From New York Pizza in McKinleyville.

On the phone this afternoon from Paul’s Live’s Eureka location, owner Paul Amato shared this news, and more. He said his landlords, Dave and Dana Figueiredo, sold to CVS the building that houses both the McKinleyville Paul’s Live pizzeria and Figueiredo's Video Movies, and gave Amato a 30-day notice (Amato says his lease was up June 1). If the sale news is true, CVS likely will put in a new pharmacy there (see our previous coverage of CVS’s purchase of the McKinleyville Lima’s Pharmacy). Dana Figueiredo declined to comment when we reached her by phone, and we’re waiting to hear back from CVS.

Amato says he’s relocating all of the equipment from the McKinleyville restaurant to the former Porter Street Barbecue site on Samoa Boulevard in Arcata, where he plans to open a new Paul’s Live there within the next four to five months.

“We’re going to be doing whole pies, parties and other stuff,” Amato says about the new Arcata location. “We’ll have an outdoor patio, with heat lamps, and approximately 20 beers on tap.”

He says some employees are sticking with him in the transition, and some have “gone their own way.”

The current Arcata Paul’s Live, on Ninth Street, is staying open, Amato adds, and both Arcata locations will be offering delivery to McKinleyville. Eventually, Amato says, he might do something different with the Ninth Street Paul’s Live (which he bought from his parents six months ago).

But there’s more: Amato says he plans to bring Paul’s Live back to McKinleyville someday — “a year to a year and a half,” he says.

So, something to live for. (Just kiddin’, Mc’Ville, of course you have other detour-worthiness.)

UPDATE: Michael DeAngelis, director of public relations for CVS Pharmacy, has sent an email saying "we have no announcement for a new CVS/pharmacy location in McKinleyville at this time."