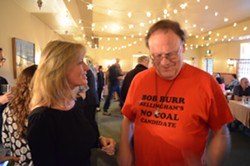 From the first report, Fleming ran away with the district attorney’s race, leaving her three challengers well behind and avoiding a November runoff by taking a whopping 60.96 percent of the vote, an almost unheard of tally for a four-way race. Elan Firpo finished second in the race, taking 25.80 percent of the vote, trailed by Allan Dollison with 8.08 percent and Arnie Klein with 4.97 percent.

In the 4th District supervisor race, Bass jumped out to an early lead when the first vote by mail ballots were counted but the race quickly narrowed, with challenger Chris Kerrigan outpacing Bass at the polls. It appears Bass’ early lead is holding, though, as she finished the night with 53.31 percent of the vote to Kerrigan’s 46.46.

The race for the county’s 5th District supervisorial seat was never close, with incumbent Ryan Sundberg dominating early and late, finishing with 61.09 percent of the vote to challenger Sharon Latour’s 38.67.

While there’s little question left as to the results of the 5th District supervisor race and that for district attorney, the results will not become final for weeks, as the elections office still needs to sift through uncounted and provisional ballots, conduct a random audit of results and have the final tallies certified by the Humboldt County Board of Supervisors.

It also warrants noting that while turnout is notoriously low for June elections, this one seems to have been particularly dismal, with only 29.88 percent (22,535 of 75,427) of registered voters having cast ballots. That number is sure to increase some, but seems unlikely to break 40 percent.

PREVIOUSLY:
Three of Humboldt County’s four local ballot measures are well on their way to passing, while the fourth — a school bond measure in Southern Humboldt Unified School District — is going down in flames.

PREVIOUSLY:
With almost 70 percent of precincts reporting, the race to become Humboldt County’s next district attorney is turning into a landslide.

Maggie Fleming is dominating the race, pulling in nearly 62 percent of the vote and leading the field by more than 6,500 votes. Elan Firpo is currently in second place with 23.34 percent of the vote, trailed by Allan Dollison and Arnie Klein, who currently have 8.46 and 5.04 percent of the vote, respectively. It’s important to note, however, that many of the county’s outlying areas still have not reported results to the Humboldt County Elections Office and there’s a slim chance, if the vote in those areas break decidedly away from Fleming, that she could still fail to get 50 percent of the vote, sending her to a runoff in November. In the general election four years ago, challenger Allison Jackson held a seemingly commanding lead over incumbent Paul Gallegos, before precincts in the southern and northern stretches of the county broke in Gallegos’ favor and catapulted him to re-election.

Meanwhile, the 4th District supervisorial race is shaping up to be much closer. Incumbent Virginia Bass is currently leading challenger

Chris Kerrigan by 303 votes, taking 53.55 percent of the vote to Kerrigan’s 46.21. It’s unclear, however, how many Eureka precincts are outstanding and whether there are enough uncounted ballots to give Kerrigan a chance.

In the race for the county’s 5th District supervisorial seat, incumbent Ryan Sundberg is running away with it, pulling in 65.76 percent of the vote to challenger Sharon Latour’s 34.04.

PREVIOUSLY:
The second report is in and Chris Kerrigan has significantly closed the gap on Virginia Bass. The Latour-Sundberg match hasn't budged much.

With 45 of 103 county precincts reporting, Bass still has a commanding lead: 55.34 percent to Kerrigan's 44.44 percent. It's unclear exactly which precincts are reporting, but less than 1,000 (non-mail in) votes have been counted from the polls in the 4th District. In the 2010 primary, 2,300 votes were cast in the district with 31 of 132 county precincts reporting. But that was a race with presidential action, so more voters likely turned up at the polls four years ago.

In the 5th District, only about 200 additional votes have been tallied since the first report, as most district precincts still have not returned their tallies to the Humboldt County Elections Office.

Supporters at district attorney candidate Maggie Fleming’s gathering on H Street in Eureka let out a hearty cheer as she read off the latest returns, which show her maintaining a commanding lead in the race, pulling 62.92 percent of the vote. Elan Firpo is currently second in the race, trailing by about 5,500 votes, with 23.23 percent. Allan Dollison remains in third place, with 8.73 percent, while Arnie Klein is currently bringing up the rear with 4.94 percent of the vote. With only 43.69 percent of precincts reporting, there’s still time for this race to become competitive but it would take a large swing to prevent Fleming from taking it outright and avoiding a runoff in November.

Humboldt County Registrar of Voters Carolyn Crnich said the recently released first batch of results includes all vote by mail ballots that had arrived at the Humboldt County Elections Office as of Saturday. The 12,431 ballots will almost assuredly represent the largest single dump of ballots of the night. Officials and observers reported a relatively modest turnout at the polls, which is not at all out of the ordinary for a June election, which a majority of registered voters generally skip. Two years ago, the county saw just 42 percent of registered voters vote in the primary. In 2010, it was just under 48 percent.

In the race to become Humboldt County’s next district attorney, Maggie Fleming has jumped out to the early lead, pulling in 63.69 percent of the first ballots counted, followed by Elan Firpo with 22.62 percent, Allan Dollison with 8.67 percent and Arnie Klein with 4.83 percent. Fleming currently has an almost 5,000-vote lead over Firpo. When the final votes are counted, the top two candidates in the district attorney's race will head to a runoff in November if none garner more than 50 percent of the vote.

We will continue updating this post throughout the night as more results come in.