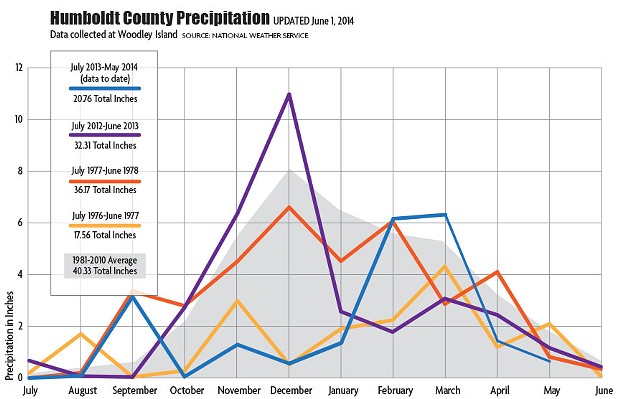 With the water year coming to a close at the end of the month, local rainfall totals have just barely eclipsed half the 30-year average. As our recent spate of sunny, cloudless days will attest, Humboldt County remains very much in a drought. The National Oceanic and Atmospheric Administration’s station at Woodley Island recorded just .58 inches of rainfall in May, bringing the year’s total up to 20.76 inches. That leaves us a bit damper than the historic drought year of 1976-1977, which recorded just 17.56 inches of rainfall, but far short of the 30-year average for the area, which comes in at 40.33 inches. Sitting at 19.57 inches below normal, things would have to get downright biblical for us to catch up. But, hey, the single-month record rainfall in Eureka was a whopping 23.31 inches in December 2002. So, you're telling me there's a chance!