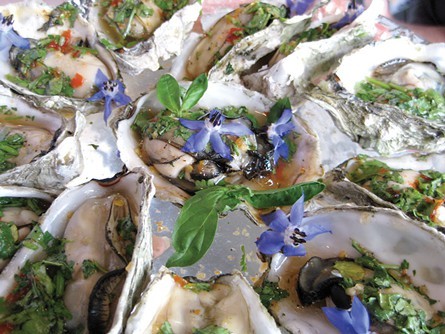 Friday afternoon, on the eve of Oysterfest, the Humboldt Community Services District dropped a bombshell of a press release, alerting the public that a massive sewage spill occurred in the Humboldt Hill area and that some may have flowed into Humboldt Bay, spurring the California Department of Public Health to halt oyster harvests as of Thursday night. But, not to worry shuckers, swallowers and downtown revelers, the spill won’t impact the festival, as the truckloads of mollusks to be consumed on the Plaza Saturday were all harvested prior to Wednesday’s spill, according to Debi Farber-Bush, a project manager for Greenway Partners, which is putting on the festival for Arcata Main Street.

Coast Seafood General Manager Greg Dale says the health department has rescinded the shellfish harvesting closure after determining the spill wouldn't impact oyster growing areas of the bay. Water samples taken Friday confirmed no impact to the farming areas, Dale says, adding that there isn't much water exchange between the south and north parts of Humboldt Bay due to the way water flows in and out of the bay's entrance. Dale also raves about agencies' response to Thursday's spill.

"HCSD, CDPH and the Humboldt County public health lab dropped everything and worked all night and most of the day to figure this out," he writes in a text message to the Journal. "They all deserve a huge pat on the back for all the extra effort... they are all great public servants."

See the full press release from the Humboldt Community Services District below:

At 8:36 a.m., Thursday, June 12, 2014, Humboldt Community Services District (HCSD) staff received notification of a potential sewer overflow in the lower Humboldt Hill area (north of King Salmon exit on Hwy. 101). Immediate dispatch of District Crews to the location enabled identification of the overflow cause and the flow was stopped by 9:30 a.m. Crews determined the cause to be a pressure sewer force main break.

Approximately 83,200 gallons spilled from the damaged pipe. There is a high likelihood that some of the sewage may have discharged into the bay. As a precaution, the California Department of Public Health closed the shellfish harvesting operations on Wednesday Thursday at 6:45 p.m. pending sample results expected to be available today, Friday, June 13, 2014. The spill area is approximately 4 miles from the possible point of bay entry to the oyster harvesting area in the North Bay. Crews worked through the night, continuing to dewater the affected spill area and return spilled sewer back into the District collection system.

According to HCSD’s General Manager, District crews did a great job of reacting quickly to stop the flow and coordinate with other agencies to minimize any potential impact to the bay and the coastal environment.

HCSD was created in 1952 to provide water and sewer service to the unincorporated areas of Eureka. The District has now expanded its service area to include Myrtletown, Pine Hill, Humboldt Hill, Fields Landing, King Salmon, and Freshwater.