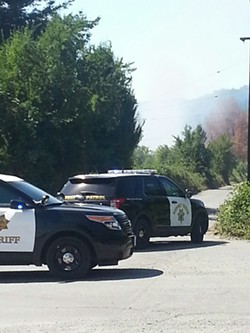 UPDATE: Hoopa Valley Tribe Public Information Office Kristan Korns reports that the fire is being treated as a suspected act of arson and that United States Bureau of Indian Affairs Investigators are on scene.

Additionally, Korns said a Hoopa Wildland Fire Department captain suffered a burn while battling the blaze, but said the injury was minor. After the fire moved aggressively across State Route 96, Korns said crews were able to halt its forward progress.

PREVIOUSLY:
Multiple agencies are battling a fire near Hoopa that has closed State Route 96 and forced dozens of evacuations.

Details are scant at this point, but the fire was reported shortly before 3 p.m. and seems to be centered around the Squires Housing complex, a cluster of eight or nine homes located between Marshall Lane and State Route 96. Hoopa Tribe Public Information Officer Kristan Korns said another 30 to 40 homes are in the immediate vicinity of the blaze.

Humboldt County Sheriff’s Lt. Steve Knight said a mutual aid call went out to local law enforcement agencies to help evacuate residences in the area. He said the sheriff’s office sent several units and was prepared to send more when the request was canceled. “At the moment, my understanding is the fire’s under control,” Knight said.

Korns said the California Highway Patrol, the sheriff’s office, the Hoopa Wildland Fire Department and the Hoopa Volunteer Fire Department are all on scene, with a helicopter and an airplane pulling water from the Trinity River to dump on the blaze. “At least one house burnt to the ground and others are in danger,” Korns said.

The Journal will update this post with more information as it becomes available.