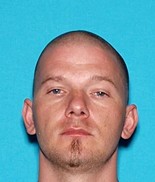 The Humboldt County Sheriff's Office has identified the victim in a homicide Friday night as 49-year-old Neil Eugene Decker, of Alderpoint, and suspect his killer was 30-year-old Matthew Aaron Brown, who remains on the loose and should be considered armed and dangerous.

Deputies responded to a call shortly before 11 p.m. Friday to the Alderpoint area to find Decker suffering from a gunshot wound to the chest. He died while waiting for a a helicopter that was coming to take him to the hospital.

The sheriff's office reports that this is the third homicide in the Rancho Sequoia area of Alderpoint, an area infamously dubbed "murder mountain," in the last two years.

Brown was last seen riding a green motorcycle and the sheriff's office asks that anyone with information about his whereabouts call 445-7251 or the department's crime tip line at 268-2539. If someone sees Decker, the sheriff's office urges not to approach the man and to instead call 911.

See the full press release from the sheriff's office below for more details:

The homicide occurred in the 2000 block of Rancho Sequoia near Alderpoint. The victim and suspect were acquainted with each other. They got into a verbal argument over personal property on Friday night before the shooting. Shortly after the argument the suspect shot the victim in the chest with a shotgun. The suspect then fled the area on a green motorcycle.

This homicide is the third homicide in the Rancho Sequoia area of Alderpoint in the last 24 months.

On 07/18/2014 at approximately 10:51 PM, the Humboldt County Sheriff’s Office received a call regarding a male subject in his fifties that was shot in the chest. The shooting occurred in the Alderpoint area of Southern Humboldt. Deputies responded with assistance from the California Highway Patrol and the Mendocino County Sheriff’s Office. Medical personnel arrived on scene and began life saving efforts. The victim was transported to a landing zone to be flown out by helicopter. The victim succumbed to his injury prior to being transported by helicopter.

The whereabouts of the suspect involved in the shooting is unknown at this time. This incident is currently being investigated by Detectives with the Humboldt County Sheriff’s Office and personnel from the Department of Justice.