When Congressman Jared Huffman called a town hall meeting about the post office, who knew so many people would show up? But show up they did, well over 100 Humboldt County residents. From Humboldt Registrar of Voters Carolyn Crnich to Etsy users, the overwhelming sense among constituents was, "No." Attendees do not want their mail routed through Medford, Ore.

A common thread emerged regarding road conditions. Say a person wanted to mail a letter across town. That letter would have to travel a minimum of 380 miles if the local post offices close.

Government efficiency was also a theme. Huffman discussed his advocacy for an updated fleet of postal delivery vehicles. Bookkeeper Ann Preston noted that her IRS-related mail arrives via UPS. "They're slitting the throats of the post office," she said.

Arcata Mayor Mark Wheetley noted that with recent changes to the Golden Gate Bridge toll methods, Humboldt residents traveling to San Francisco would be at a disadvantage should the mail take longer. A toll invoice could arrive halfway to being late, he said. "It's the little things" among the greater repercussions, he said.

Huffman emphasized his commitment to solving the problem in response to John Fesler's remark that, "I fear today will be a great gripe session, but what's our action item?" 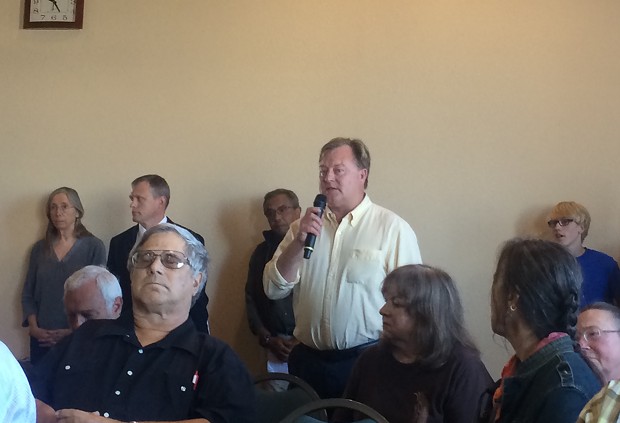 "This is an incredible turnout," Huffman said. "When I go back to Washington, I'll push this forward in every way possible." He defined three key points: jobs, service to the community and the broader issue of what the demise of postal service means. His constituents include wine makers to the south, he said – Humboldt County also has great wine, he was quick to add – but currently wine can't be shipped through the USPS. That's the sort of thing that needs to change, Huffman finished.