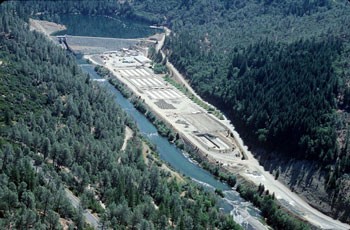 SECOND UPDATE: On Monday, Aug. 25, around 5 p.m., the San Luis & Delta-Mendota Water Authority filed for a temporary restraining order in Fresno Superior Court to stop the increased flows. Dan Nelson, executive director of the water authority, said Tuesday that the issue is much the same as last year when his agency and the Westlands Water District filed for a restraining order after the bureau approved emergency releases into the Trinity: balancing uses.

“We understand there are competing demands and that there are legitimate uses for this water,” Nelson said. “We don’t think the bureau, in its decision-making process, has taken into consideration all the impacts.”

Nelson also said the bureau can’t keep declaring emergencies each year, but instead should for once and all put together a long-term plan, with environmental documentation. He envisions getting all of the Trinity water stakeholders together, including tribes and water districts, to craft the plan, and says his agency has been asking the bureau to facilitate this for the past five years. Instead, the bureau seems to be going it alone on the long-term planning.

“We’d like the opportunity of sitting down with the tribes and working out a mutual agreeable solution,” Nelson said.

A judge will set a hearing on the restraining order request, and the bureau will have a chance to file a brief in response.


FIRST UPDATE: The San Luis & Delta-Mendota Water Authority likely will file for a temporary restraining order to stop the increased flows granted by the U.S. Bureau of Reclamation, according to a KQED report. And in a statement, the water authority complains that its water users — mostly agriculture lands, but also some municipal, industrial, and wildlife refuges — could use some extra water, too, but have been denied; accuses the Trinity River Management Council and the bureau of neglecting to set aside water for emergencies; and refers to the 2002 fish die-off in the Klamath River as a "once in history" occasion and  says that conditions in the river this year do not match those of that year.

"The only condition that has changed is the increase in volume in the voices of a few special interests," says the statement.

They also said they hoped the action — a reversal of the July 30 decision by the bureau not to release more flows — has come soon enough.

“We are happy that the B.O.R.’s decision came out in favor of fish,” said Thomas P. O’Rourke Sr., chairman of the Yurok Tribe. “They did the right thing.”

More than 60,000 fall Chinook died in 2002 as a result of low flows and warm water temperatures. The warm, stagnant water fostered growth of parasites and pathogens that spread rapidly among salmon as they crowded into deeper pools and at the mouths of tributaries, seeking cooler water.

Susan Masten, vice chair of the Yurok Tribe, also expressed pleasure at the bureau’s decision but concern that it could be too late.

“We have seen a few fish die already, and we’ve seen an increase in algae in the river and the water temperatures are too high,” she said.

Masten says the conditions in the river “are much worse today” than they were in 2002. She was tribal chair in 2002, and says the tribe’s scientists had warned the bureau back then that conditions were bad enough to cause a fish kill — to no avail. This year, she says, the tribe began pleading with the bureau as early as January to let more water into the Trinity (which flows to the Klamath), noting we are in a third year of drought. The Yurok, Karuk and Hoopa Valley tribes and others have met regularly with the bureau since to try to agree on a flow schedule. And protesters have further raised awareness and alarm.

Masten said the 2002 fish kill sharpened the tribe’s scientific understanding of the conditions that lead to such disasters, including the knowledge that, once dead fish start showing up, things can get out of hand fast. The tribe knew this, she said, and tried to convince the bureau early on that this could be a bad year and not to wait until fish started dying.

In a conference call this morning, Bureau of Reclamation Mid-Pacific Regional Director David Murillo said the bureau based its July 30 decision not to release more flows into the river system on science and on what the bureau knew at the time. Then, after monitoring, more discussions with water users and with tribal scientists, and a tour of the river, the bureau developed a better sense of the conditions and realized they were, indeed, not just similar to those in 2002, but “unprecedented.” Murillo noted, among them, low flows, warm water, fish crowding into cooler pools, toxin-producing blue-green algae growth and “observations of acutely stressed and lethargic fish.” Don Reck, with the bureau, added that “there was just a lot of new information that was brought to everyone’s attention.” And that’s why the bureau finally agreed that increased flows were necessary "to help reduce the potential for a large-scale fish die-off."

Masten said she's pleased the bureau accepted the tribe's scientific findings. "Hopefully it will be soon enough," she said. "It still will take a couple of days for the water to hit the lower Klamath."

Mike Belchik, senior fisheries biologist with the Yurok Fisheries program, said the tribe has tracked fish numbers since 1998 and noted patterns in behavior. He said that, every year, thousands of fish use the cold waters near Blue Creek, the largest tributary to the Klamath on the Yurok Reservation and the largest cold-water refuge from warm river water in the Klamath and Trinity rivers. And, most years, these fish are predominantly juveniles. But in 2002, thousands of adult fish used it for an extended period of time leading up to the fish kill. And that's happening again this year, Belchik said.

In the conference call, Ron Milligan, who is the bureau’s Central Valley Operations manager, said the increase of flows from the reservoir into the Klamath River system would not cause a decrease in flows into Clear Creek and the Sacramento River, so there would be no harm to salmon, farmers or other water users in the Sacramento Valley. Instead, the bureau would just draw the reservoir down — and hope that next year is not another critically dry year.

Allie Hostler, Two Rivers Tribune editor, asked if the bureau has a time frame for developing a long-term plan in order to avoid future crises like this. Murillo said he doesn't but that the bureau is working on it and would “hopefully wrap up a plan soon.”

Aug. 23: At 7 a.m, the Bureau will begin increasing releases from Lewiston Dam, from 450 cubic feet per second to about 950 cfs to achieve a flow rate of 2,500 cfs in the lower Klamath River.

Aug. 25: At 7 a.m., releases from Lewiston Dam will begin increasing to about 2,450 cfs to achieve a flow rate of about 4,000 cfs in the lower Klamath River. This release will be maintained for about 24 hours before returning to about 950 cfs. Releases will remain at about 950 cfs, as necessary, to maintain lower Klamath River flows at 2,500 cfs until about Sunday, Sept. 14.

The Bureau promised that river and fishery conditions will be continuously monitored, and those conditions will determine the duration of increased releases. It also cautioned people to be careful around the rivers as flows ramp up.