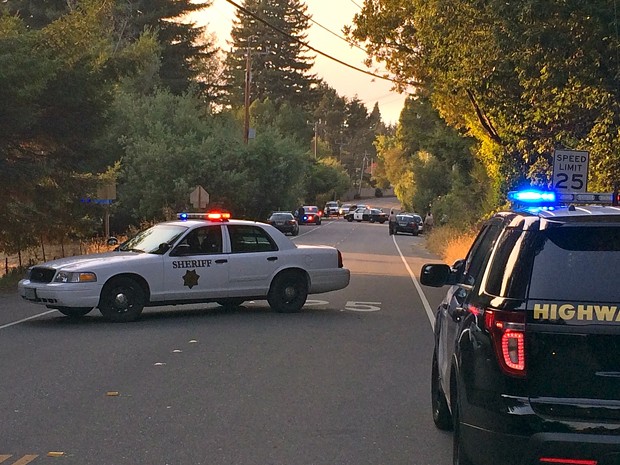 The investigation into the killings of Harley Wayne Hammers and Angel Robin Tully, both 37, continues, the sheriff's office reports, adding that detectives will be serving a search warrant on Arreaga's car today and that autopsies are scheduled in the case for tomorrow.


Update:
The suspect in the double homicide out in Fieldbrook yesterday has been arrested three times in the last 18 months, and may have recently been released from state prison, the Journal has learned.

Jason Michael Arreaga, 29, was arrested at about 12:30 this morning, some seven hours after he allegedly opened fire in Fieldbrook, killing Harley Wayne Hammers and Angel Robin Tully, both 37, in front of a residence in the 4000 block of Fieldbrook Road. It was at least the third time the Lucerne, California, man has been arrested since April of 2013.

According to booking records from the Lake County jail, Arreaga was arrested April 24, 2013 on suspicion of a hit and run causing damage, driving under the influence, felony possession of concentrated cannabis and bringing a controlled substance into jail. Six months later, on Oct. 13, 2013, Arreaga was again arrested by Lake County deputies, according to a report in the Lake County News, this time after an argument escalated into a fist fight, at which point Arreaga allegedly pulled a knife and stabbed James Martin. Arreaga was later charged with assault with a deadly weapon and assault causing serious bodily injury stemming from the incident.

The Lake County District Attorney’s Office said both Arreaga’s 2013 cases were resolved with guilty pleas, but calls seeking further information have yet to be returned. The Journal called the California Department of Correction and Rehabilitation to see if Arreaga had served a prison term stemming from either of the cases and, if so, when he was released and if he is currently on parole. But — after checking into the Journal’s inquiry — CDCR spokeswoman Kristina Khokhobashvili said she couldn’t release any information about Arreaga until receiving authorization from the Humboldt County Sheriff’s Office, “as it is their investigation.”

According to the booking sheet from Arreaga’s April 2013 arrest, he was employed as a landscaper at the time, and was listed as standing 6 feet, four inches tall and weighing 290 pounds, with brown hair and eyes.

About seven hours after Wednesday’s shootings, scanner traffic indicated Arreaga was travelling south on U.S. Highway 101 with two other people when his vehicle was pulled over and he was arrested. Humboldt County Sheriff’s Office Lt. Steve Knight said this afternoon that he couldn’t comment on the status of any other potential passengers in Arreaga’s car, saying only “one person was arrested” during the traffic stop. Knight was similarly tight-lipped about other details surrounding the investigation, but did say detectives Arreaga and the victims were embroiled in an escalating argument immediately preceding the shootings.

Knight also praised the detectives working the case for developing probable cause to arrest Arreaga as quickly as they did, and the Eureka Police Department for alertly spotting Arreaga’s vehicle and helping to affect his arrest.


Previously:
The man suspected of shooting and killing two people in Fieldbrook Wednesday evening is in custody, according to the Humboldt County Sheriff's Office.

In a press release, the sheriff's office also identified the victims of the shooting as Harley Wayne Hammers and Angel Robin Tully, both 37, of Eureka. Tullly was dead when officers arrived on scene, and Hammers was transported to Mad River Hospital where he was later pronounced dead.

Through their investigation, detectives identified 29-year-old Jason Michael Arreaga, of Lucerne, California, as the suspect in the case and put out a be-on-the-lookout warning to other law enforcement agencies. According to the release, Eureka police spotted Arreaga's vehicle travelling on U.S. Highway 101 at about 12:30 a.m., and he was taken into custody. He is currently being held on $1 million bail.

After being closed since the shooting, Fieldbrook Road reopened at 11:40 a.m.

Read the full sheriff's office press release below, and past Journal coverage here.

On 09-03-2014, at approximately 5:07 p.m., the Humboldt County Sheriff’s Office received a 911 call regarding shots fired and a deceased female at a residence in the 4400 block of Fieldbrook Road, Fieldbrook. Deputies and medical personnel were dispatched to the scene. While deputies were enroute the Sheriff’s Office received additional calls with the callers saying the female was deceased near a trailer on the property and there was a male yelling for help in the driveway
.
The first deputy arrived on scene at 5:17 p.m. The deputy immediately learned there were two victims, an adult male, later identified as Harley Wayne Hammers Jr. 37 years old, from Eureka and an adult female, later identified as Angel Robin Tully, 37 years old, from Eureka, both whom had been shot. Hammers was located by the deputy across the street from where the shooting had occurred. Medical personnel treated Hammers for gunshot wound injuries and transported him Mad River Community Hospital where he was pronounced deceased. Tully was declared deceased at the scene.

Sheriff’s Office Detectives responded to the scene, and the California Highway Patrol, and Humboldt County Public Works assisted with closing Fieldbrook Road, from Anker Lane to Wagle Lane, which had become part of the crime scene.

Sheriff’s Deputies and Detectives searched the area for a shooting suspect and spoke with witnesses. Detectives learned during their investigation the suspect was Jason Michael Arreaga, 29 years old from Lucerne, California. Arreaga had been in an argument with the victims. Detectives learned Arreaga was driving a Gold 2001 Buick four door sedan. A be-on-the-lookout was broadcast for the vehicle to law enforcement agencies.

At approximately 12:30 a.m., 09-04-2014, a Eureka Police Officer spotted the Buick driving southbound on US 101 as it was passing through south Eureka. The Eureka Police Officer followed the vehicle until Sheriff’s Deputies arrived and assisted in the traffic stop. The vehicle was stopped on US 101 at Singly Hill off ramp, Loleta. Arreaga was driving the vehicle and Arreaga was arrested for two counts of homicide and was transported to the Humboldt County Correctional Facility where he was booked into jail. He is being held on one million dollars bail.

Detectives are still on scene, and still actively working on the case. They have requested
Arreaga’ s photograph be withheld at this time while they continue interviewing eye witnesses.

The Humboldt County Coroner’s Office has scheduled the autopsies to be conducted 9-6-2014.


Additional information may be released at a later time as it becomes available, this is still an active investigation.